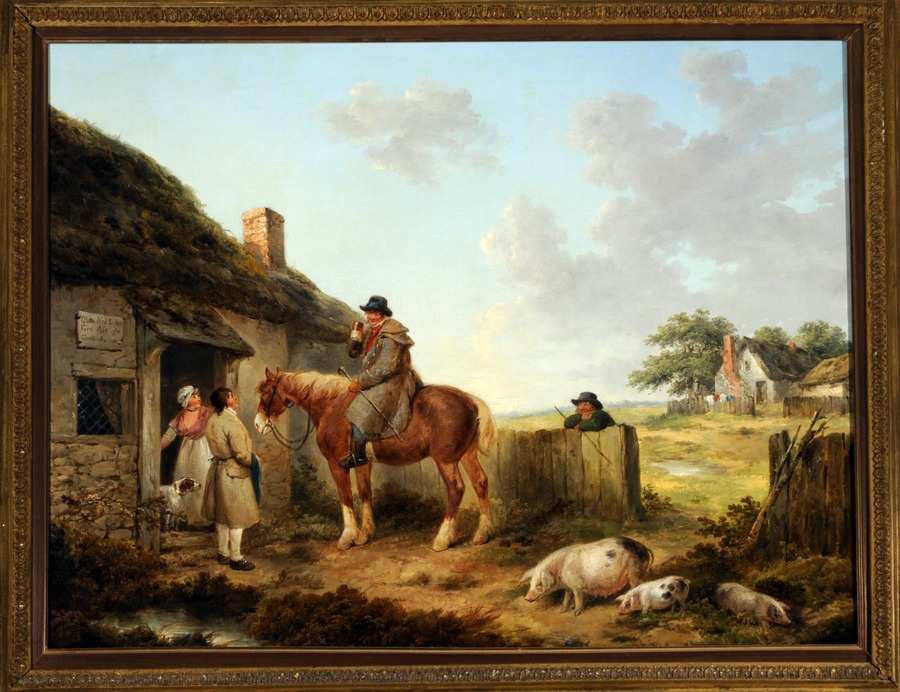 A Call at the Red Lion Inn

In our catalogue: A Call at the Red Lion Inn

Morland was one of the most popular English artists of the 18th century, a period when native-born painters displaced continental artists as masters of the English art scene.

He depicted the everyday lives of the common people in rural England, earning appreciation and affection among the middle and upper classes. However, he lived among the impoverished people he painted, and knew that for them life was not the idyllic existence his work suggested.

Like Hogarth, Morland avoided patronage, preferring the freedom of independence. His work sold well, but his income was never enough to support his debauched lifestyle. Increasingly alcoholic, and almost always in debt, he was jailed twice and ended his days in prison at the age of 41.

Landscape with cottage and windmill

In our catalogue: Landscape with Cottage and Windmill

The poetic or literary quality of Corot's work aligns it more strongly to classical conventions than to those of the Barbizon painters with whom he is often associated.

Nevertheless, his plein-air method of sketching accords with the romanticist claim for nature for its own sake, and is well expressed in this small panel. It shares similar features with Le Coup de Vent (Musée des Beaux-Arts, Reims), itself associated both with the artist's period in Cayeux in 1853 and his trip to Holland in 1854.

This is one of two paintings by Corot (the other is a landscape probably painted at Ville-d'Avray, near Versailles) formerly in the collection of Lord Brotherton and bequeathed to the University by his niece. 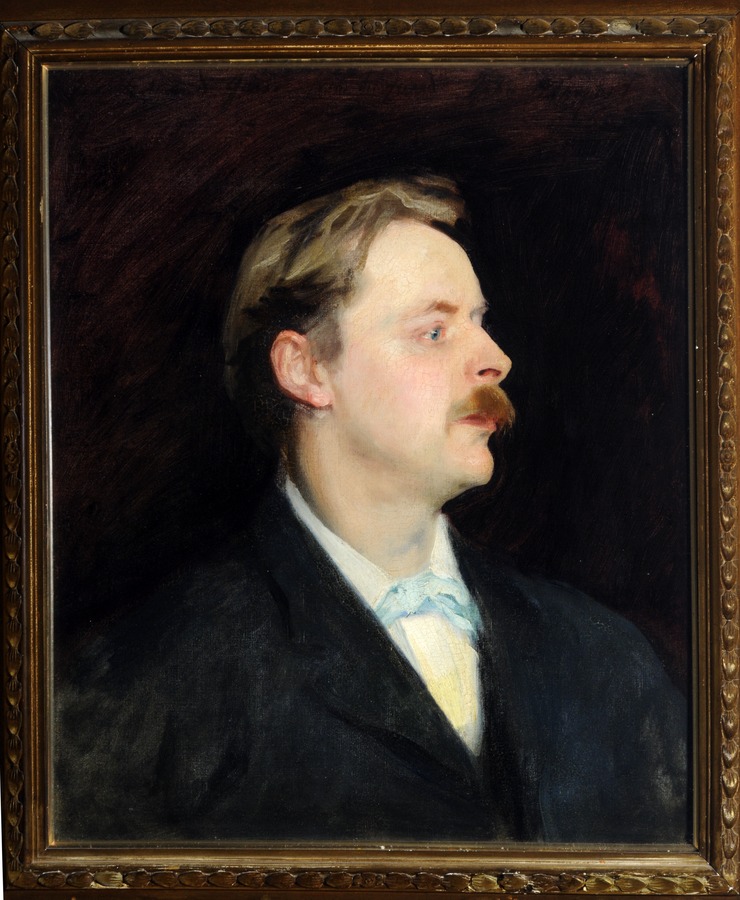 In our catalogue: Portrait of Edmund Gosse

Inscribed, across top: to Edmund Gosse from his friend John S. Sargent

Bequeathed to the Brotherton Library by Sir Philip Gosse, 1959.

Rodin declared Sargent to be 'The Van Dyck of our times' He was favoured by the wealthy and privileged of Europe and America for his technical brilliance and mastery of colour. This, coupled with an often bravura presentation, lent a striking elegance to his sitters without compromising his perception of their individuality.

He met Edmund Gosse (1849-1928), a distinguished critic and man of letters, at Broadway in the summer of 1885, when the latter was Clark Lecturer in English Literature at Trinity College, Cambridge. Enchanted by lilac reflections of sunlight in Gosse's hair, Sargent immediately proceeded to sketch him where he stood.

A more conventionally formal and less animated work, also painted in 1886, is in the National Portrait Gallery in London. 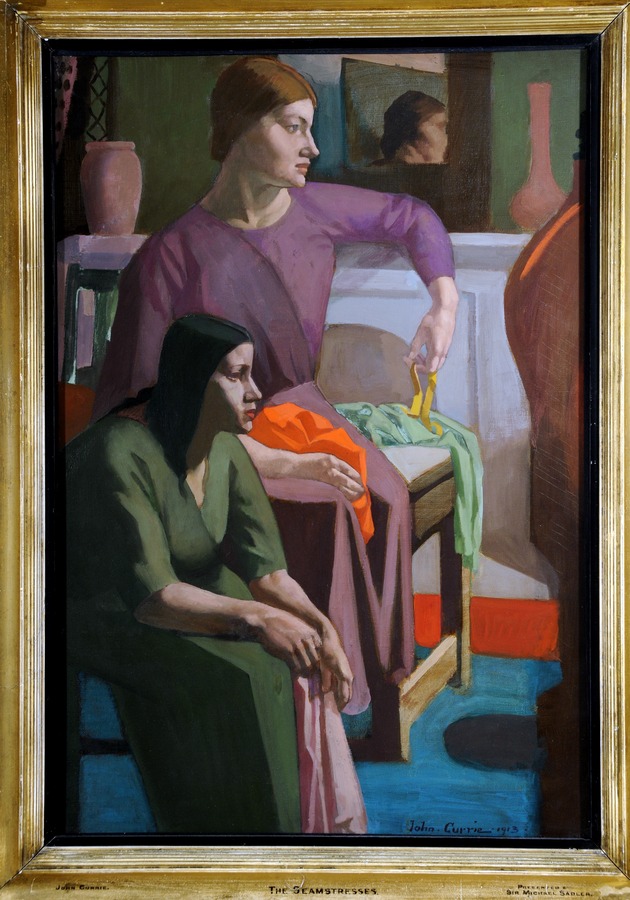 In our catalogue: The Seamstresses

Sadler recalled visiting Currie's house in 1913 when the artist was living with Dolly Henry in Heath Passage, a secluded place in Hampstead near The Spaniards Inn. Currie was reading Dostoevsky aloud to two girls, with photographs of a landscape by Cézanne and works by Italian primitives pinned up in the small painting room.

He identified the women in this painting as the fair-haired Dolly, whom he described as 'evidently not highly educated' and her Irish cousin Mary, who had come to stay with the couple in 1913'in a status between guest and servant'. He found Mary 'silent and intense', adding credence to the suggestion that she might also be the subject of Currie's Head of a Woman, 1913, now in the Tate Gallery, London.

Sadler's fascinating insight into Currie's domestic arrangements is published in Michael Sadler's Michael Ernest Sadler, a Memoir by his Son, 1949. 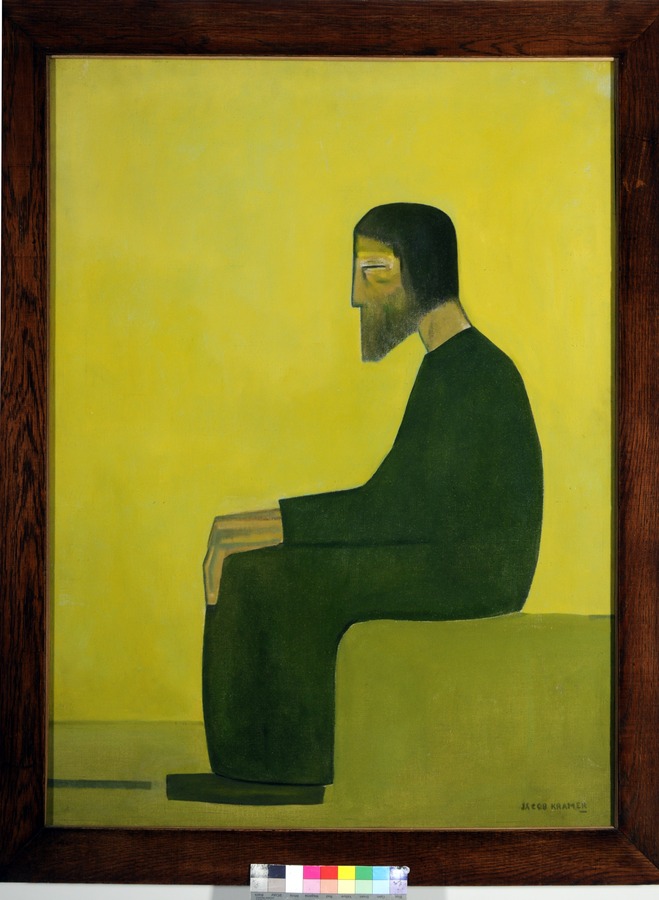 In our catalogue: Meditation - "The Jew"

Bought by the University from the Belgrave Gallery with the assistance of the MGC/V&A Purchase Grant Fund, the Art Fund, and the University of Leeds Convocation, 1993

Kramer's family had settled in Leeds in 1900, and Jacob was one of the many young artists encouraged by the support and patronage of Michael Sadler. Sadler bought this painting from the artist, and it remained in his collection until his death in 1943.

Painted during his early forays into London, The Jew marked the beginning of a highly innovative period in which Kramer applied a rigorously condensed Vorticist style to Jewish subject matter, in his continuing exploration of colour and form as an expression of the spiritual.

The University has a large collection of drawings by Kramer, and the Library holds much of his correspondence. There are over 60 letters from Sadler to Kramer, including his written appreciation of The Jew.

Estate of John David Roberts. By courtesy of the William Roberts Society. 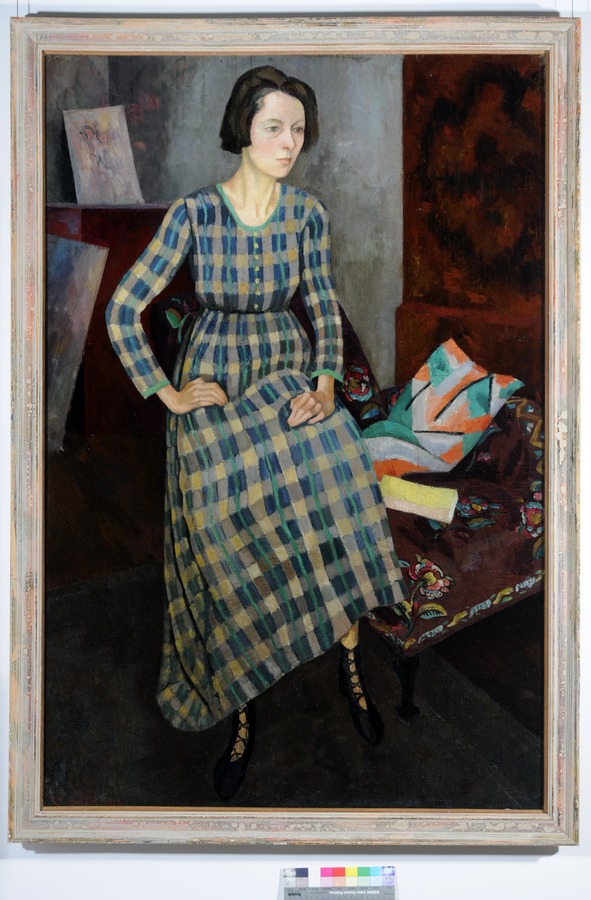 In our catalogue: Portrait of Nina Hamnett

Purchased from the artist's daughter Pamela Diamand by Quentin Bell on behalf of the University and with funds given by Stanley Burton, 1965.

This painting serves as a singular visual testimony to the Omega Workshops, which Fry founded in 1913. It is one of at least five portraits he painted of Nina Hamnett after they started an affair in 1916.

Painted at Durbins, Fry's house near Guildford, the portrait depicts Hamnett wearing the plaid dress that Vanessa Bell had designed for Omega two years previously. The cushion appears to be covered in Maud - one of two printed linen designs that Bell produced for the workshop in its founding year. 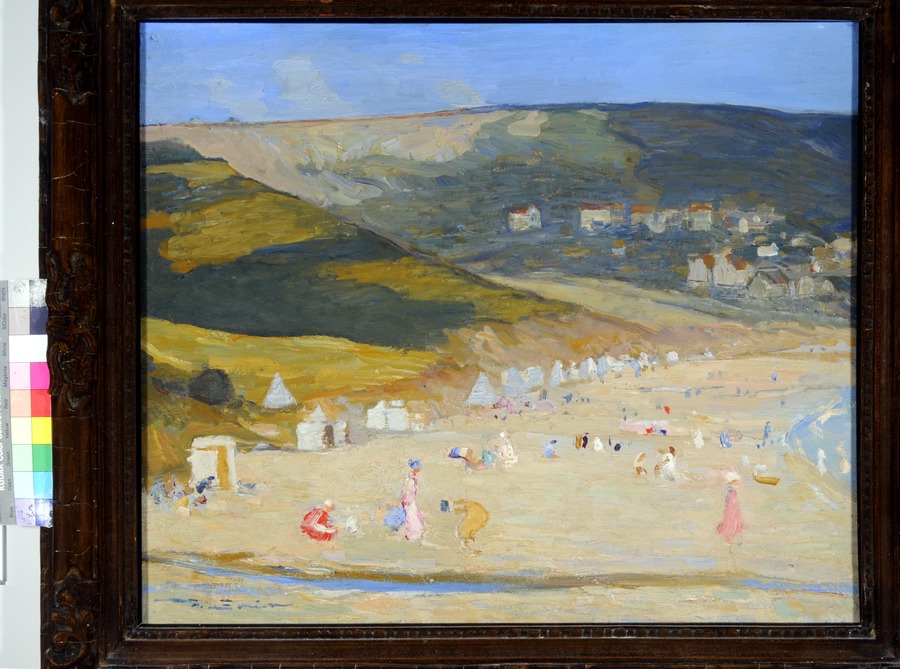 In our catalogue: Runswick Bay

Bought with the assistance of the Dorothy Turner Bequest and the MGC/V&A Purchase Grant Fund, 1999

Senior was a founding member of the Staithes Group, a colony of artists essentially drawn to the idea of natural realism and plein-air painting. He used his fisherman's cottage at Runswick Bay every summer to paint the dramatic landscape of the North Yorkshire coast.

This painting displays the fluidity and skilful colouring which distinguishes Senior's best work, and shows his debt to Philip Wilson Steer, whom he accompanied on several painting trips.

Dorothy Turner, who worked in the School of Agriculture at the University of Leeds from 1929 until 1961, gave the University a small group of Yorkshire paintings in 1992. She also subsequently bequeathed money for additions to the Yorkshire Collection. 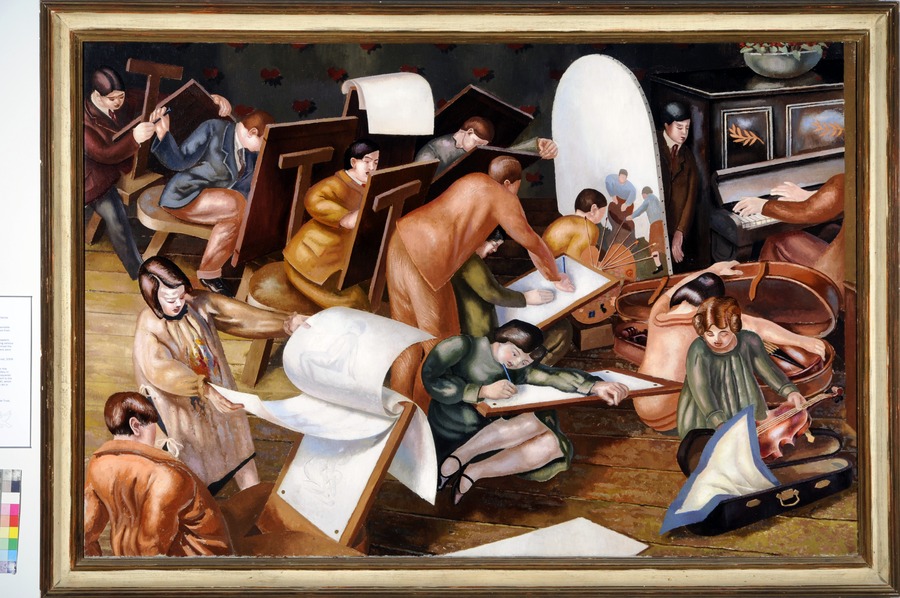 In our catalogue: The Art Class, left outer panel from the Empire Marketing Board Series

Left outer panel from the Empire Marketing Board Series

Gift from the Audrey and Stanley Burton Charitable Trust, 2009

In 1929 the Empire Marketing Board - a body responsible for colonial trade - commissioned a series of posters from Spencer on the theme of Industry and Peace.

Spencer produced a series of five panels, or a pentaptych, depicting various trades, vocations and professions as a 'long sort of room'. The Art Class formed the left outer panel in this 'panorama of life'. The posters were never published.

© The Estate of Stanley Spencer 2012. All rights reserved DACS. 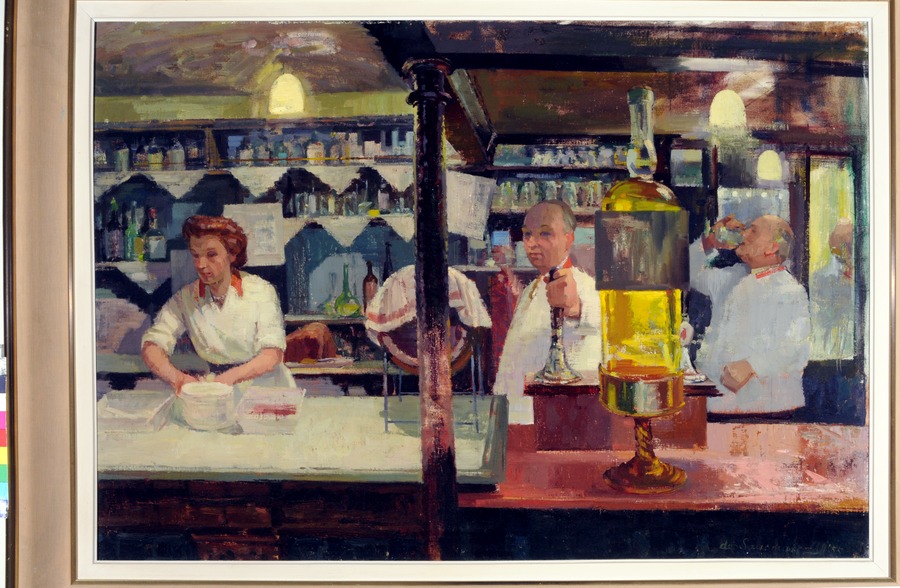 Hidden in Turk's Head Yard - an alleyway off Briggate - Whitelocks is reckoned to be the oldest surviving Leeds pub. In the 1940s and 1950s, when Maurice de Sausmarez was teaching in Leeds, it was a favourite haunt of writers, poets, artists and academics.

The measured poetic structure of the image is typical of De Sausmarez's work, which acknowledged the tradition of Cézanne.

An educationalist as well as painter, De Sausmarez's book, Basic Design, provided a lucid account of practices and procedures available to schools and foundation courses in art. His writing was largely informed by his association with Harry Thubron at Leeds College of Art.

In 1962, De Sausmarez became Principal of the Byam Shaw School of Drawing and Painting in London. The first Head of Fine Art at the University, he was succeeded by Quentin Bell. 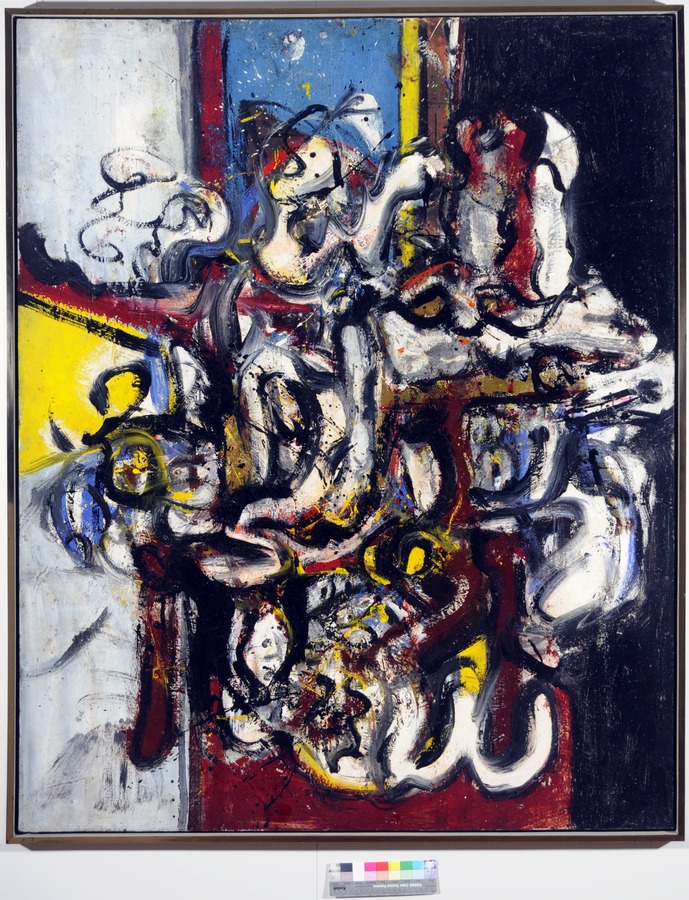 Purchased with the assistance of the MLA/V&A Purchase Grant Fund, the Art Fund, and the bequest of Georgina Dobrée, 2010

Figure Mask No. 2 exemplifies Alan Davie's work at the time he became Gregory Fellow in Painting at the University of Leeds (1957-59). The painting shows the influence of improvisational jazz music on the Scottish abstract artist.

1956 was a turning point in Davie's career, with exhibitions worldwide. At this time, he began to work in series, creating paintings such as Figure Mask No.2. He would lay several boards on the floor and work on them simultaneously, using shared forms, patterns and colours in each painting. Through the process of painting, making changes, additions and erasures, the final series of paintings relate to each other, without being repetitious. 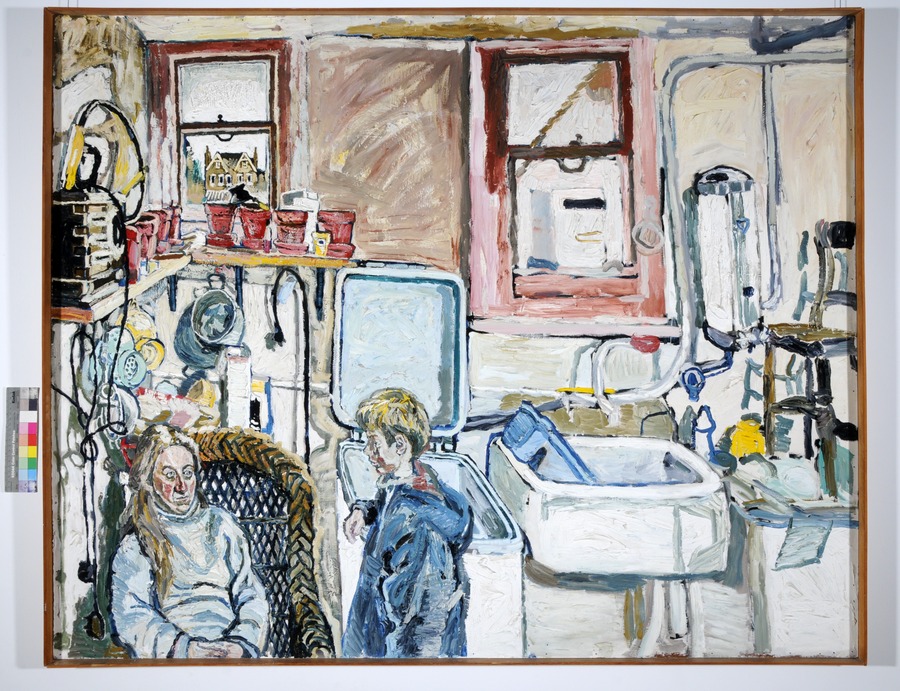 In our catalogue: Kitchen

In the 1950s, Bratby painted a number of domestic interiors in which realism was combined with an aggressively expressionist style. The critic David Sylvester published an article in 1954 about recent trends in British art. He used an example of Bratby's work (a depiction of a kitchen sink) to draw attention to the new interest amongst younger painters in subjects which stressed the banality of life - thereafter coined 'kitchen sink' realism.

Letters were exchanged between the artist and Mr and Mrs Andrews, who bought the painting in the 1970s. In one of them, Bratby gives an illuminating account of his domestic arrangements at the time the picture was painted, as well some of the changes that success had brought - including a new washing machine, and a warmer kitchen.

Image ©The Estate of John Bratby/ The Bridgeman Art Library