From traditional watercolour to modern collage and print, our works on paper are undeniably diverse. 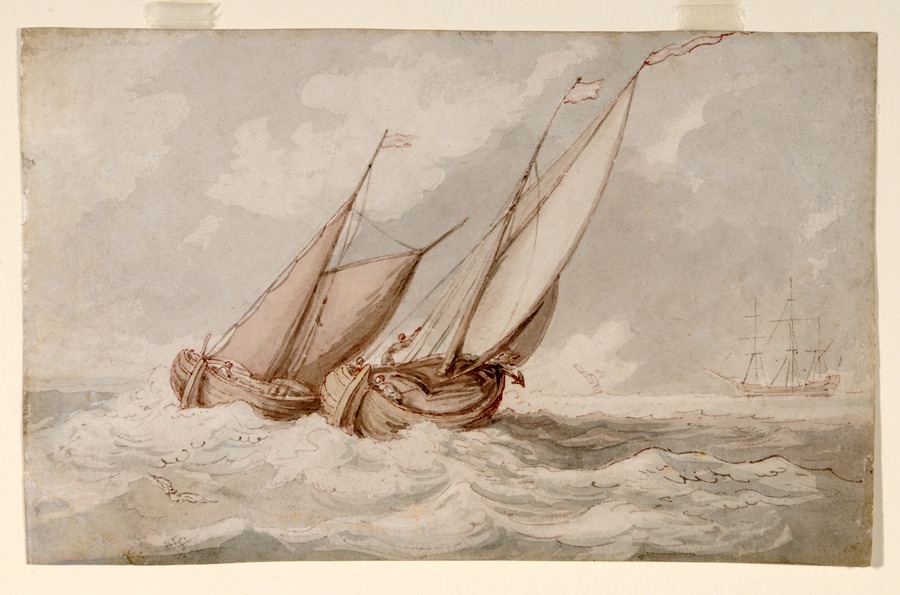 An offshore scene in a stiff breeze

In our catalogue: An offshore scene in a stiff breeze

Purchase enabled by the Friends of University Art and Music (Leeds), and the Arnold Ziff Charitable Trust, 1992

Born in London, Rowlandson studied art in Paris and at the Royal Academy Schools. Best known for the political and social satire in which he was engaged during the 1780s, he was a versatile artist, working extensively as a book illustrator.

Rowlandson was a seasoned traveller in Britain and Continental Europe, often producing drawings after old masters. His landscape style owed much to the work of Gainsborough, from which it was adapted.

The subject of this work is not readily associated with Rowlandson. The work was purchased to complement others in the University's collection of English watercolours. 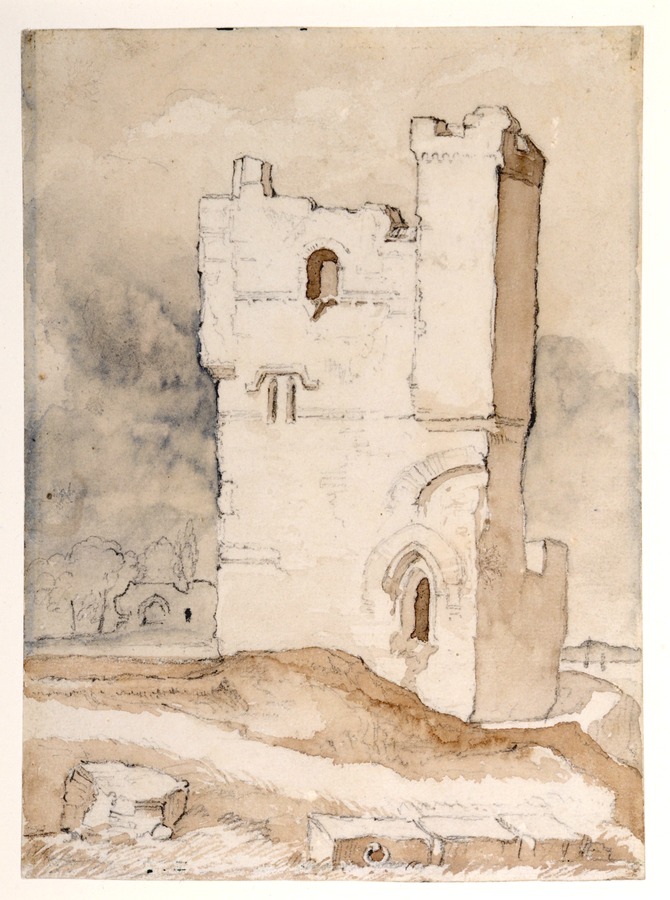 In our catalogue: A Ruined Tower

pencil and watercolour on paper

Cotman made extensive tours of Norfolk, Suffolk and Normandy, frequently in the employ of the antiquarian Dawson Turner.

The subject of this drawing is unidentified, but it is possibly a preparatory drawing for one of his commercial etchings of architecture.

Sadler collected English watercolours from the 18th and 19th centuries as well as contemporary art. This drawing was one of a group which he gifted to the University in 1923, including a study attributed to Turner and ink drawings by Alexander Cozens. 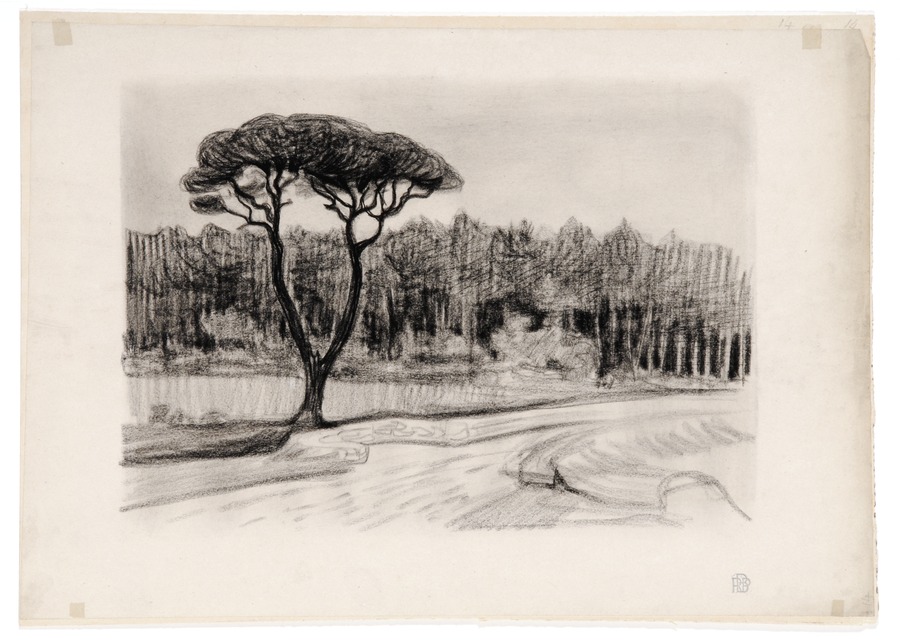 The Road by the Forest, Brittany

In our catalogue: The Road by the Forest, Brittany

One of two drawings donated by Bevan's son, this complements the three others purchased from him by Quentin Bell. Bell developed the collection on behalf of the University of Leeds when he was Professor of Fine Art in the 1960s.

Bevan was a founding member of the Camden Town group, which is further represented in the collection with drawings by Drummond, Gilman, Ginner, Gore, Ratcliffe and Sickert.

This work probably dates from Bevan's second visit to Brittany, when he came under the influence of Gauguin. 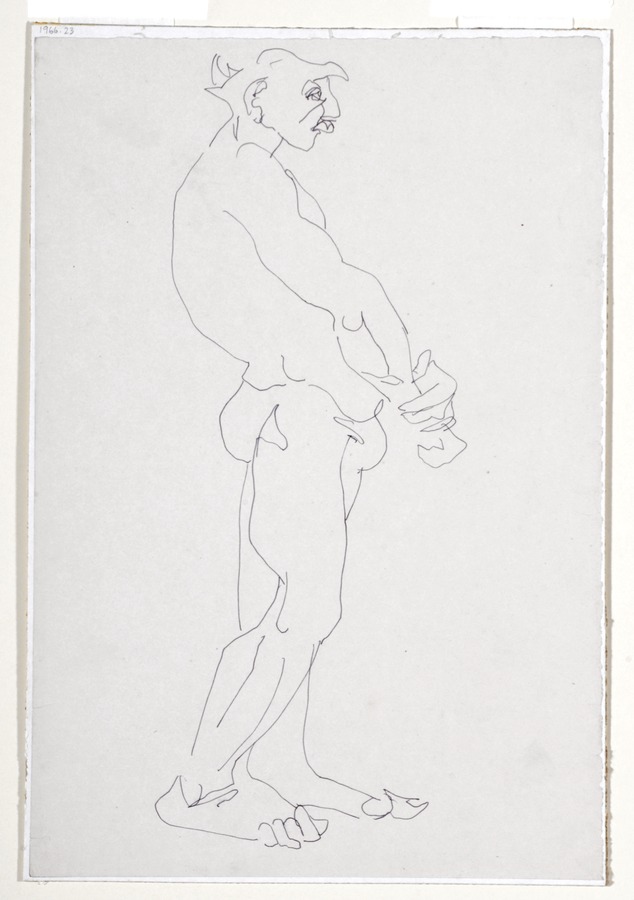 pen and ink on paper

Involved with artists and writers of the Vorticist group, the young sculptor exerted a considerable influence over his English contemporaries before his life was cut cruelly short in battle during the second year of the First World War. 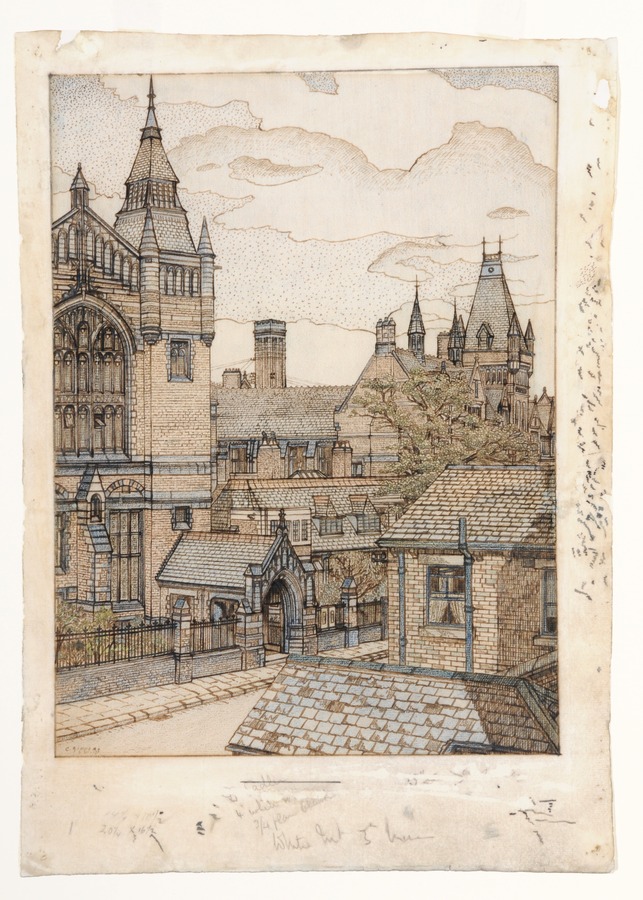 In our catalogue: University Buildings, Leeds

pen and watercolour on paper

First recorded in 1960, this drawing is believed to have been acquired from the artist by Sir Michael Sadler, and formed part of the gift made in 1923.

It shows the entrance and part of Waterhouse's Great Hall, which was opened in 1894. The area to the left of the entrance became the focus of attention for different reasons in 1923, when Eric Gill's Moneychangers relief was placed against its wall.

A glimpse of its upper edge is just visible in archive photographs taken when the Prince of Wales visited the University the same year, when crowds flooded onto the roofs of the terraced houses opposite, from one of which Ginner's drawing must have been made.

Commissioned by Sadler as a memorial to members of the University who fell in the First World War, Gill's relief was met with both admiration and derision, and was later moved to the new arts block, now known as the Sadler Building.

©The Estate of Charles Ginner 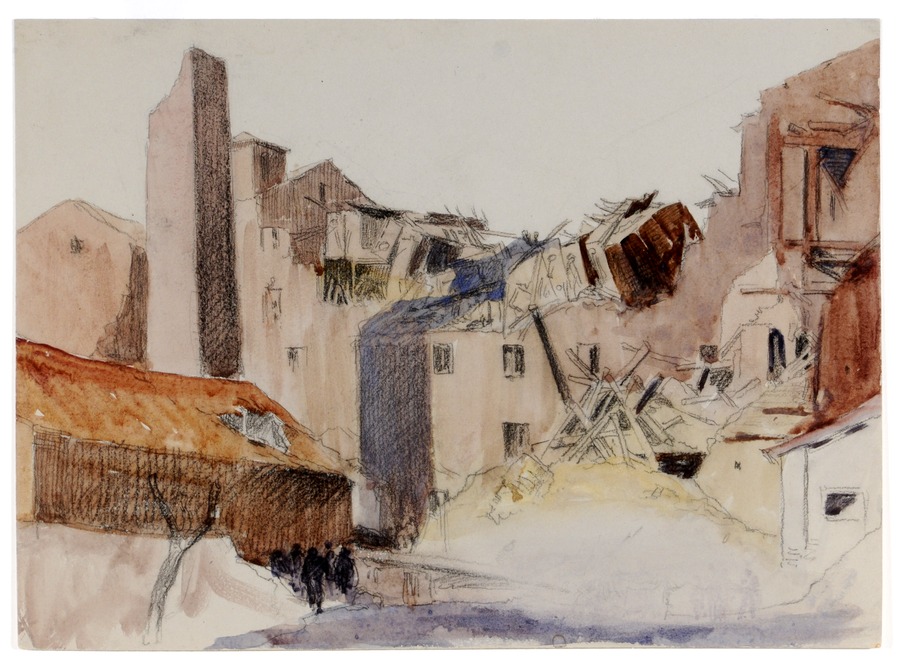 In our catalogue: Macaroni factory, Messina

The grandson of the Leeds locomotive manufacturer, Kitson moved to Sicily in 1899 and created the legendary villa and gardens of Casa Cuseni at Taormina. His friend and patron Frank Brangwyn designed much of the furniture and decorations for the villa.

Casa Cuseni was inherited by Kitson's niece Daphne Phelps, who enabled its survival by taking paying guests. In 2001, she generously gifted many of Kitson's sketchbooks and finished watercolours to the University, which has enjoyed a long association with the family.

David Boswell, who helped Daphne effect the transfer, identified this drawing as having been made in 1910, when Kitson and Brangwyn visited Sicily and sketched the earthquake-stricken ruins of Messina.

Courtesy of the great- nephews and nieces of Robert Kitson. See www.casacuseni.com 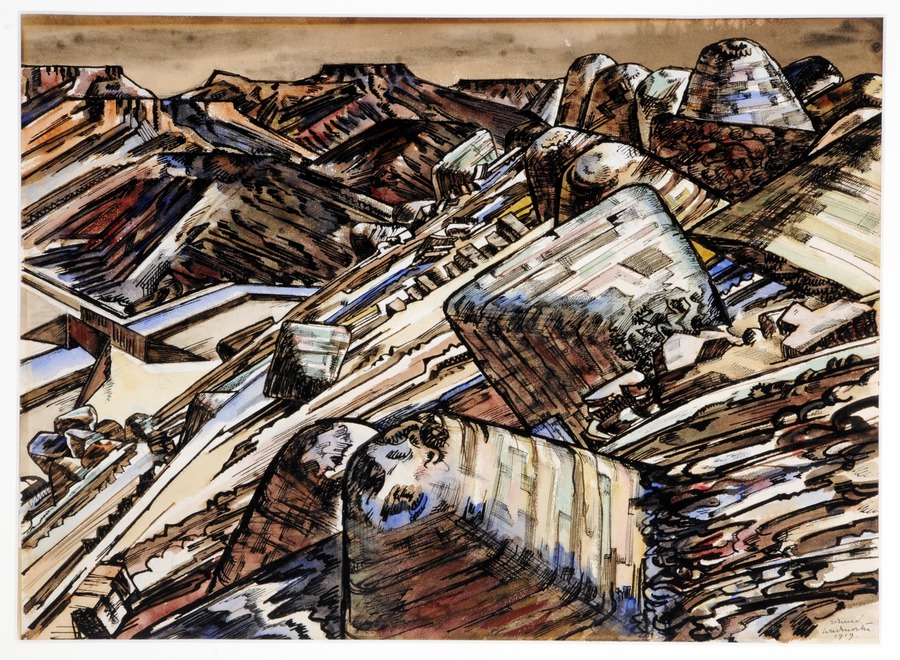 ink and watercolour on paper

Born in Cleckheaton, Wadsworth graduated from the Slade School in 1912. He turned down Roger Fry's invitation to become involved in the Omega Workshops in favour of a close association with Wyndham Lewis and the Vorticists.

His preoccupation with the English industrial landscape led to a series of studies of the Black Country, made in 1919 and shown at the Leicester Galleries in London the following year.

Sadler purchased two works from the exhibition: Ladle Slag, brilliant in its colouring and monumental in its sculptural forms, and Hingley's Furnaces, Old Hill, a more restrained pen drawing with brown wash. They appear as plates IX and X in the Ovid Press Black Country book, 1920.

The University bought Sadler's copy of the book, signed and presented to him by Wadsworth, in the late 1980s. It is held with the two drawings in the University collection. 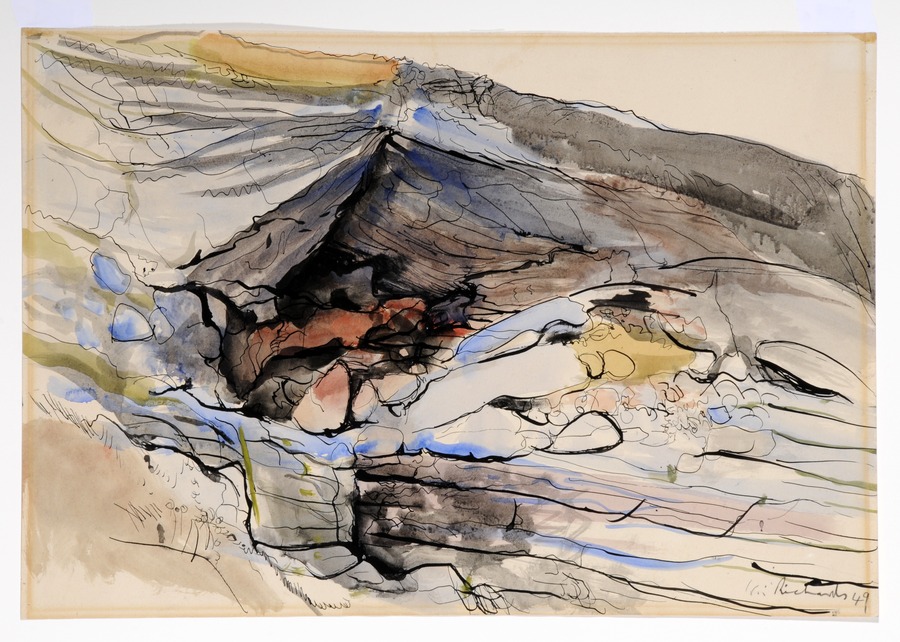 In our catalogue: Bacon's Hole, Gower

watercolour and ink on paper

The Gower coast was the scene of many childhood holidays for Richards.

In this work, the recognisable dips and hollows of the landscape are traced and explored sensually as much as descriptively - evidence of Richards' romantic belief that there is an inseparable link between painting and an artist's feeling for the subject. 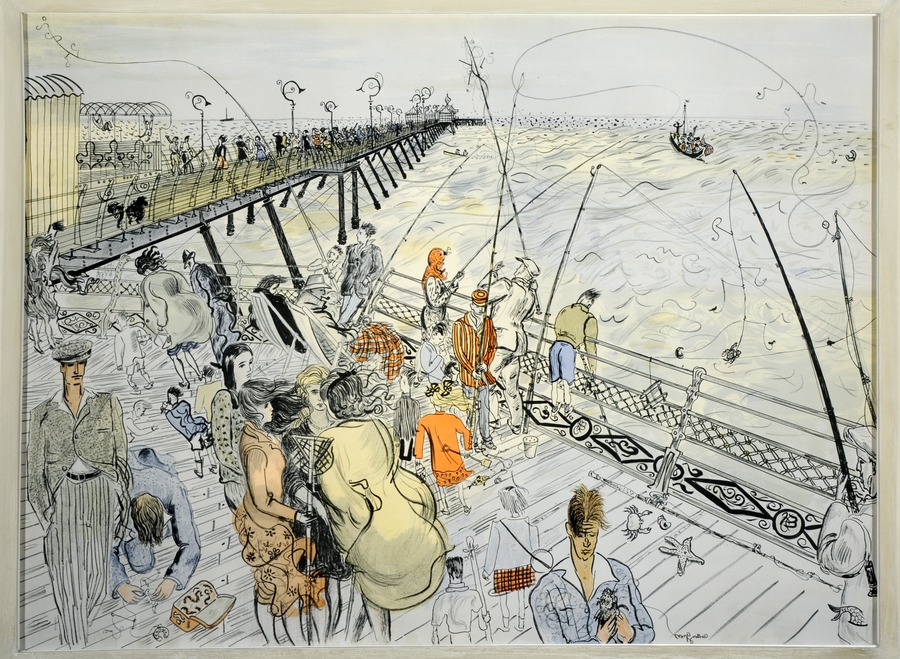 In our catalogue: Herne Bay Pier

In 1947, J Lyons and Co commissioned a series of colour lithographs by contemporary artists to decorate their teashops. Herne Bay Pier was printed at Chromoworks in London, and was the first of three designs that Anthony Gross produced for the series. His Cricket Match and Louisiana Landscape followed in 1949 and 1954 respectively.

This lithograph is one of a group of unnumbered large editions held in the University and, together with other popular prints by artists such as John Piper and Edward Ardizzone, adds a fascinating dimension to an extensive collection of British prints. 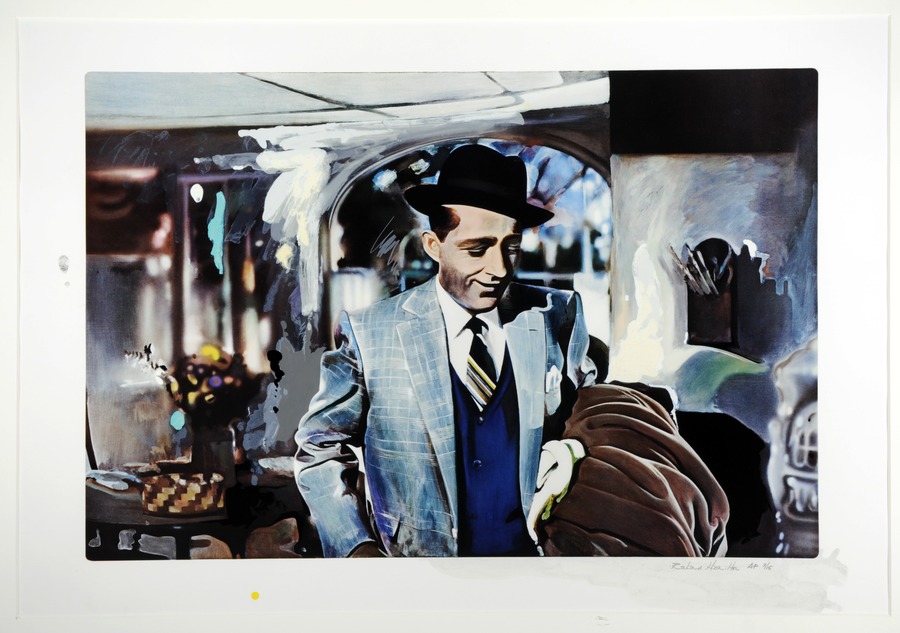 I'm Dreaming of a Black Christmas

In our catalogue: I'm Dreaming of a Black Christmas

screenprint on collotype, with collage and wash

Hamilton made a series of prints and paintings on this subject - a frame from the 1954 Bing Crosby film White Christmas - between 1967 and 1971, using a range of complex and astonishing techniques to produce an image that remains a staple icon of so-called Pop art.

Printed in Stuttgart and Bavaria, the print went through several proofing stages, when Hamilton's command of the processes allowed him to retain considerable control.

The print is one of several transferred to the University in 2001 from the Bretton College Collection. It forms a significant addition to the collection first developed by Quentin Bell, which includes seminal pieces from the 1960s by Paolozzi, Ayres and Hockney.