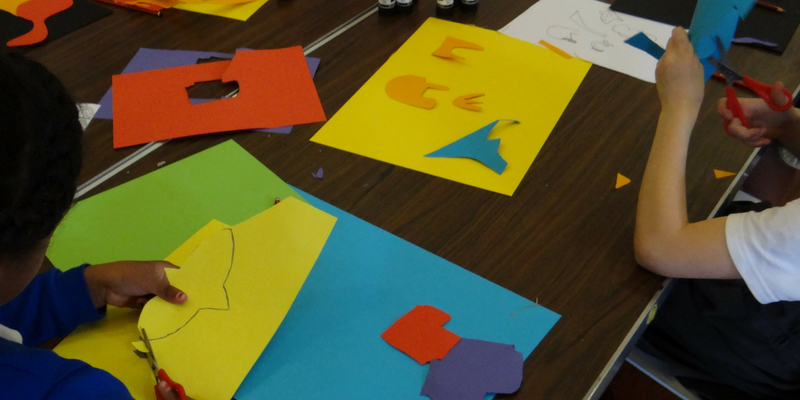 Footsteps into Art was a three year education project at The Stanley & Audrey Burton Gallery, which began in November 2015. The Footsteps Fund generously funded the project. Schools had up to three creative workshops at the Gallery per year, plus extra workshops in school. The schools had no previous relationship with the Gallery. They were selected because they are close to the University of Leeds.

We had two ambitions for the Footsteps into Art project. Firstly, to foster a love of art and art making in children. In particular, we focussed on creative process and experiencing art works first hand, rather than the final outcome.

Secondly, to encourage the children to see galleries and museums as places for them to visit and enjoy. In particular, we helped them form a lasting relationship with Leeds University Library Galleries.

The children took inspiration from a range of works on display in the Gallery. They explored different art mediums, including block, mono and collagraph printmaking; casting; mark-making; textile art; sound and light art; and 3D land-art drawings.

Comments from Footsteps into Art participants:

I can't wait to come back next week, I'm going to be so excited.

It was really nice to see all the children working independently, especially those that usually need a lot of adult support and reassurance.

[activities] were beneficial in terms of allowing children to not be afraid of 'going wrong' because there is no 'wrong'!