The Irish poet Pearse Hutchinson held the Gregory Fellowship in Poetry from 1971 to 1974. His interest in translation prompted the publication of two issues of Poetry and Audience entirely devoted to translated works. 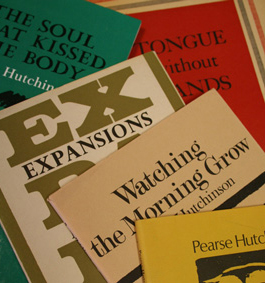 Pearse Hutchinson was born in Glasgow in 1927 and raised in Dublin. After studying at University College Dublin, he spent two years working as a translator for the International Labour Organisation in Geneva. He lived in Barcelona between 1954 and 1957, and between 1961 and 1967. Immediately prior to taking up the Gregory Fellowship, he worked as a freelance journalist and broadcaster in Dublin. Some of his earliest poems were published in the Irish literary magazine The Bell in 1945. His first collection of poetry in English, Tongue Without Hands, was published in 1963.

Hutchinson took up the Gregory Fellowship in Poetry in October 1971, on the recommendation of Professor A. Norman Jeffares. Earlier in the year, the student pressure group Direct Action accused Jeffares of bias and nepotism in the choice of Gregory Fellows in Poetry, including a claim that Hutchinson had been selected for the Fellowship due to their shared Irish heritage. Kevin Crossley-Holland was similarly targeted. The accusations were later retracted, along with an acknowledgment of the expertise of the Gregory Fellowships Advisory Committee. (1)

Hutchinson held tenure of the Gregory Fellowship for three years, and like other Fellows, contributed both poems and editorial advice to Poetry and Audience magazine. The first issue of Poetry and Audience for the session 1971-1972 was a 'special issue' entirely devoted to Hutchinson's poetry, and published in a limited edition of 200 numbered copies; it was later reprinted as a result of its success. He selected and edited two issues of Poetry and Audience comprised solely of translated poetry, including translations of his own from Irish, Catalan and Galician. He may also have been influential in arranging a reading by Irish poets at the Leeds University Arts Festival in 1972.

Following the Gregory Fellowship, Hutchinson returned to Dublin. He has continued to write poetry in English and Gaelic, and in 1975 was co-founder of the Irish literary magazine Cyphers with Leland Bardwell, Eiléan Ní Chuilleanáin and Macdara Woods. During the late 1970s he compiled and presented Oró Domhnaigh, a weekly radio programme of Irish poetry, music and folklore. His collected poems were published in 2002.