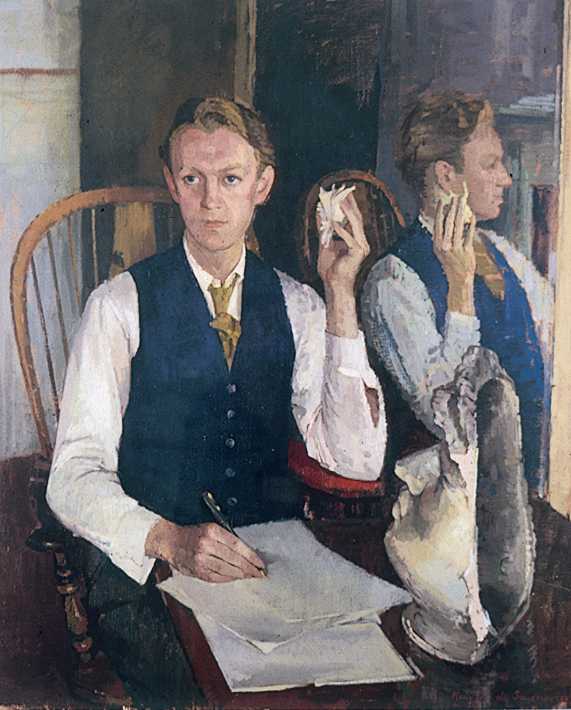 James Kirkup was the first poet to take up the Gregory Fellowship in Poetry following its inauguration in 1950, aged 32. His time in Leeds is marked in particular by the poem 'A Correct Compassion,' which he wrote from direct experience after observing a heart operation at the surgeon's side.

James Falconer Kirkup, the poet, novelist, playwright, translator and broadcaster, was born in South Shields, Co. Durham, on 23 April 1918. He was educated at Westoe Secondary School, South Shields, and went on to study Modern Languages at Armstrong College (later part of the University of Durham), where he was involved in the production of the poetry magazines Dint and Fulcrum. Some of Kirkup's early surrealist poems appeared in these publications, and in Platitude, a literary magazine based at Oriel College, Oxford, then sub-edited by David Wright.

During the 1940s, Kirkup became involved in the poetry readings organised by the Progressive League in London. It was through these readings that he met future Gregory Fellows John Heath Stubbs and David Wright, as well as Roy Campbell, Stephen Spender, Muriel Spark, Ross Nichols and others. Kirkup recalls Wright being quite enthusiastic about his poetry, and on occasion read Wright's poems for him. (1) Nichols and Kirkup later collaborated on the volume The Cosmic Shape (London: Forge Press, 1946), an examination of myth and legend which included Kirkup's long poems 'The Glass Fable ' and 'The Sleeper in the Earth.' Also during his time in London, he met Jon Silkin, who he admired, "both as a poet and as an inspired and revolutionary editor." (2) Kirkup was an early contributor to Stand, three of his poems appearing in the second issue; and on "one or two occasions" he helped Silkin distribute copies of the magazine.

Kirkup's first book of poetry, The Drowned Sailor and Other Poems, was published in 1947, and brought him into contact with Joe Ackerley, editor of The Listener. Ackerley was to become a close friend, and put Kirkup forward as a candidate for the first Gregory Fellowship in Poetry at the University of Leeds, with the support of Herbert Read. Responding to a questionnaire on Creative Writing Fellowships in 1979, Kirkup stated that he had also been recommended by Cecil Day-Lewis (who had himself been a candidate for the Fellowship). (3)

Kirkup became the first Gregory Fellow in Poetry in 1950, and was the first writer to hold a 'writer in residence' post within an academic institution in the United Kingdom. During his time at Leeds he developed friendships with the artists Jakob Kramer (whom he had previously met during the War whilst working as a conscientious objector in the Yorkshire Dales) and Maurice de Sausmarez; and poet and lecturer Wilfred R. Childe. De Sausmarez, the first Head of Fine Art at the University of Leeds, painted a portrait of Kirkup in 1951 which is now held in the University's art collections (pictured above). Childe introduced Kirkup to Robin Skelton, who was then a student in the Department of English Literature; Kirkup recognized and encouraged his talent as a poet. Skelton had already become involved in publishing poetry by this time, having edited the 1949 collection Leeds University Poetry (Hull: Lotus Press, 1949), featuring his own work and that of Childe, Derrick Metcalfe, Kenneth Muir and others. He went on to collaborate with Metcalfe on the Acadine Poets series, and in 1951 published Kirkup's long poem The Creation. (4) 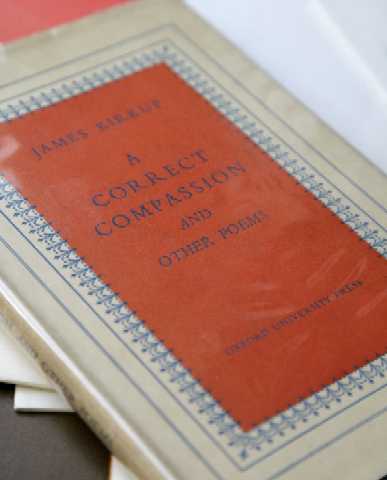 Kirkup's perception of his role as Gregory Fellow in Poetry was: "to be myself and do as I pleased with absolute artistic and bohemian freedom." (5) He chose not to stay in the student accommodation offered to him, preferring to rent a room in a boarding house on Brunswick Place near the city centre (then part of Leeds' red light district). He met with students in coffee shops, pubs and occasionally his bedsit to discuss their poetry; set up a poetry reading group with Robin Skelton, which met in pubs close to the University; and also became involved in University drama. Kirkup appeared alongside G. Wilson Knight, Kenneth Muir, Arnold Kettle and others in a production of King Lear; and was also commissioned to write a play for the female members of the University's Drama Society. The resulting verse play, Behold the Bridegroom!, was based on the parable of the wise and foolish virgins, and was considered a great success. (6)

Leeds would certainly appear to have inspired Kirkup's writing during his time as Gregory Fellow. The collection A Correct Compassion, published in 1952 and dedicated to Peter Gregory, contains a number of poems about Leeds including 'A City of the North' (first published by Joe Ackerley in The Listener) and 'Wreath Makers: Leeds Market.' The title-poem of the collection was the product of perhaps one of the most significant events of Kirkup's fellowship, when he attended a heart operation at Leeds General Infirmary performed by the surgeon Philip Allison. A Correct Compassion also includes 'Birds in a Glass Case,' dedicated to the first Gregory Fellow in Painting, Martin Froy; and a poem on one of Henry Moore's Reclining Figure sculptures. Kirkup appreciated the "friendly pubs and saunas and easy access to all the beauties of Yorkshire" that Leeds offered him, but ultimately was glad to, "shake the dust of Leeds from [his] feet." (7)

After his Gregory Fellowship, Kirkup went on to take up various academic posts, mainly abroad. From 1953-1956 he was visiting poet and Head of the Department of English at the Bath Academy of Art (run by Clifford and Rosemary Ellis); Martin Froy also became a member of staff at the Academy during Kirkup's time there. In 1956 Kirkup took his first job abroad as a travelling lecturer in Sweden for the Swedish Ministry of Education; and in 1957 was appointed to teach English at the University of Salamanca, a position obtained with the help of Agostin de Irizar of the Portuguese Department at the University of Leeds.

Kirkup went on to hold a number of lectureships and professorships of English in Japan (Tohoku University 1961-1962; Japan Women's University 1964-; Nagoya University 1969-1972; Kyoto University of Foreign Studies 1977-1989), founded the literary magazine Poetry Nippon in 1966, and in 1969 became President of the Poet's Society of Japan. He also held posts in the United States (Amherst College, Massachusetts, 1968; Ohio University, 1975-1976); and held further fellowships/residencies in the United Kingdom: an Arts Council Creative Writing Fellowship at Sheffield University (1974-1975); and the position of Playwright in Residence at the Sherman Theatre, University College, Cardiff (1976-1977). He won many awards for poetry and other branches of literature, and was elected a Fellow of the Royal Society of Literature in 1962. He moved permanently to Andorra in the late 1980s.

Kirkup was a prolific writer, publishing over 150 volumes of poetry, translations, autobiography and travel writing during his lifetime, as well as many short articles. His last volume of poetry, Marsden Bay was published by the Red Squirrel Press in 2008.

(3). Information from Kirkup's responses to a survey on Writers in Education conducted by Alan Brownjohn for the Arts Council in 1979 (Leeds University Library Special Collections).

(4). James Kirkup, The Creation, with a cover design by Muriel Metcalfe; Acadine poets, no. 2 (Hull: Lotus Press, [1951]). Robin Skelton and Derrick Metcalfe were general editors of the Acadine poets series, which also published works by Wilfred R. Childe and Jules Supervielle. There were plans for further publications, including a collection of Kirkup's translations and Edwin Morgan's Dies Irae, but these were never produced. The Acadine series ceased publishing in 1951 due to lack of finance.

(6). Although never repeated at Leeds, Behold the Bridegroom! has been successfully staged by the Switch Drama Company in Hull, and is expected to be performed again as part of their 2007-2008 season.

See also Kirkup's I of All People: An Autobiography of Youth (London: Weidenfeld and Nicholson, 1988), especially pp. 208-241 on his Gregory Fellowship; and A Correct Compassion (London: Oxford University Press, 1952).