The little magazine Stand was founded by Jon Silkin in London in 1952, using £5 redundancy money from a caretaking job. The aim of the magazine, as stated in its first Editorial, was: "to encourage more and more people to read and enjoy poetry ... and ... persuade the poet into more contact with his readers." (1) Interestingly, many of the 'Leeds poets' contributed to Stand in its earliest days, including Thomas Blackburn (published in the first issue), James Kirkup, William Price Turner and John Heath-Stubbs; James Simmons, then a student at Leeds, was also an early contributor. Stand, in its first incarnation, ceased publication in 1957 due to lack of funds. 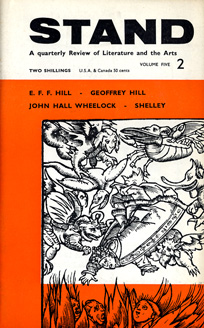 Jon Silkin came to Leeds in 1958 to take up the Gregory Fellowship in Poetry, a position he held for two years. The creative literary environment at Leeds, and encouragement from G. Wilson Knight and A. Norman Jeffares of the Department of English Literature, prompted him to attempt to relaunch the magazine. Meetings involving Silkin and members of the University co-opted onto the Stand 'team' were held in the University's Extra-Mural Department as early during 1959, where the operational side of the magazine's relaunch was discussed, including printing, advertisers and distribution. Silkin outlined the magazine's general policy at this time as a, "stand against apathy" in which a high standard would always be maintained, qualifying this by stating that: "the saying of something important [would] always ... take precedence over the saying of something unimportant supremely well." (2) He wrote to local industrialists to request financial support, including University benefactors Stanley Burton and Bernard Gillinson, and later credited the magazine's revival to, "the generosity of some Northern businessmen." (3)

The first issue of Stand to be published from Leeds appeared in February 1960 at a cost of 2 shillings, and included contributions from Tony Harrison, D.W. Jefferson (Department of English Literature), and John Rex (Department of Sociology), alongside Dannie Abse, Vernon Watkins and others. Harrison was also credited as an editorial advisor. Silkin's flat at 144 Otley Road essentially served as the magazine's offices. Ken Smith became a co-editor in 1963; Jon Glover also became involved in its production and distribution. The magazine continued to be published from Leeds, with the support of the Department of English Literature, until 1965, and quickly established an international readership and reputation. It is clear that from its earliest days, Silkin considered and intended Stand to provide a platform for new and socially-committed writing, but it was perhaps during its time at Leeds that the magazine gained the identity it retains to this day: "a forum for serious poetry and fiction for new as well as established writers, and a place where the unglamorous, the unfashionable, the oppositional, the innovative, the unEnglish, the radical voices might gain a hearing." (4) 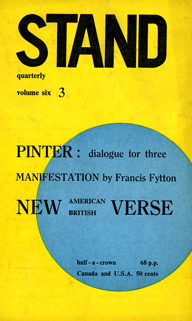 Silkin and Stand moved from Leeds to Newcastle in 1965, prompted by financial aid from the Northern Arts Association. Tony Harrison edited the magazine for a short period in the late-1960s whilst Silkin took up a year's residency at the University of Iowa Writers Workshop, and was responsible for the issue devoted to Czech writing published in 1969. The magazine continued to be published from Newcastle until the late 1990s.

The Stand Archives were acquired for the Brotherton Collection at Leeds University Library in 1995. Rodney Pybus and Lorna Tracy continued to edit the magazine from Newcastle following Silkin's death in 1997, after which it returned to the University of Leeds. It continues to be published from the School of English; Jon Glover is the managing editor.

The Northern House publishing venture was established by Andrew Gurr and Jon Silkin in the Department of English Literature at Leeds in 1963. At Gurr's suggestion, the Chair of English Literature, A. Norman Jeffares, had agreed to provide funding for the acquisition of a hand printing press for the use of bibliography students. Gurr acquired an old double demy Albion hand press, typefaces and other equipment for just over £250, and the press was set up in the basement of the University gym, at that time underneath the Students' Union. Silkin first approached Gurr about the possibility of printing his Flower Poems using the press in early 1963; the idea soon expanded to producing a series of poems in pamphlet under the imprint Northern House Pamphlet Poets. Stand magazine would be used as a medium for publicity and access to poets; Silkin, Gurr and Ken Smith (already a Stand co-editor) would be the directors of Northern House. Subscription lists were circulated through Stand, the London Magazine and Encounter to raise funds for the production of the first pamphlets.

As a published magazine of poetry, Northern House had two aims: 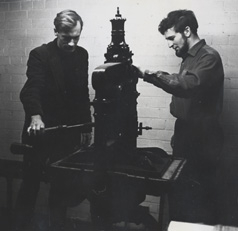 The first three Northern House pamphlet were published in May 1964, and represented three 'Leeds poets': Jon Silkin (Flower Poems), Ken Smith (Eleven Poems; his first pamphlet publication), and Geoffrey Hill (Preghiere). Tony Harrison's first pamphlet collection, Earthworks, was issued later that year, followed by Ted Walker's Those Other Growths. Jon Glover and Jeffrey Wainwright became co-editors in the late 1960s; both had pamphlets of their own poetry published under the Northern House imprint, as did Gregory Fellow William Price Turner.

When Andrew Gurr left the UK for New Zealand in 1969, Northern House relocated from Leeds to Newcastle where, by that time, Jon Silkin was based. Pamphlets published following this move include the second edition of Tony Harrison's Newcastle is Peru, and Silkin's long poem Watersmeet (in conjunction with the Bay Press). In all, Northern House Pamphlet Poets issued over 30 publications between 1964 and 1995.