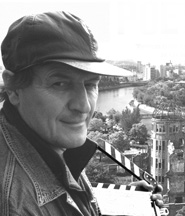 Tony Harrison was born and bred in Leeds, and was a student at the University in the late 1950s. His interest in poetry and theatre led to his involvement with Poetry and Audience magazine and the Rag Revue. He also came into contact with Gregory Fellows in Poetry, Painting and Sculpture.

Tony Harrison was born in Beeston, South Leeds on 30 April 1937. He was an early beneficiary of the 1944 Butler Education Act, and aged 11, won a scholarship to Leeds Grammar School. Despite his thirst for knowledge, he found the tension between his working class background and grammar school education quite hard to come to terms with, and has written about it extensively in his poetry.

Leeds University was familiar to Harrison during his school days, the Grammar School at that time being situated very close to the campus. In 1955, he became an undergraduate in the Classics Department, but soon came into contact with students in the Department of English Literature, including James Simmons and Wole Soyinka, through his interests in poetry and the theatre. Early in his student days, Harrison started to submit poems to Poetry and Audience; his first published poem, 'When Shall I Tune My 'Doric Reed,' appeared in the magazine in January 1957. He went on to become a member of the editorial board, and looks back on this as an important time in his development as a poet. The opportunity to write, read and talk about poetry with contemporaries who had similar aims and aspirations, including occasionally heated debates involved in the selection of content for Poetry and Audience, was encouraging. (1)

Harrison appears to have been no stranger to controversy during his time on the editorial board of Poetry and Audience. When Professor of English Literature A. Norman Jeffares suggested the inclusion of more translations in the magazine, his perceived attempt at influencing its content prompted Harrison to publish a series of translations of Sappho fragments, only a few words long. (2) During Harrison's editorship, James Kirkup's poem 'Gay Boys' was published in the magazine, prompting a backlash from former editor Anthony Mortimer and others. Its appearance came only two years after the publication of the Wolfenden Report. (3) Jon Silkin, then Gregory Fellow in Poetry, responded twice within the magazine's pages to Mortimer's complaints. Much later in his career, Harrison would come to experience similar public virulence following the television broadcast of his poem v., and the film poem, The Blasphemer's Banquet.

In addition to poetry, Harrison keenly pursued his interest in the theatre whilst at Leeds. As well as contributing poems to Poetry and Audience, he wrote reviews of University drama with fellow student John Hearsum. He found the opportunity to see Italian lecturer Frederick May's productions of previously untranslated plays by Pirandello exciting. Harrison also became involved in the Rag Revue, writing sketches, and performing alongside contemporaries including Barry Cryer, James Simmons and Wole Soyinka at the Empire Theatre on Briggate. The biographical note which accompanied his first poem in Poetry and Audience described him as having, "a remarkable talent as a comedian," following his Rag performance the previous year. (4) 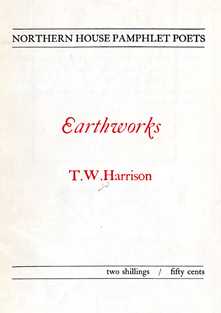 Harrison came into contact with many of the Gregory Fellows during his time in Leeds, both poets and artists. Thomas Blackburn was the Gregory Fellow in Poetry during his first undergraduate year; he found Blackburn's combination of using fairy stories to explore sexuality with formal verse forms very interesting. (5) He came to know Gregory Fellow in Sculpture Hubert Dalwood well; his visits to Dalwood's studio on Cottage Road, Headingley, once included a lesson in the principles of working with clay. He also knew Gregory Fellows in Painting, Terry Frost (1954-1956) and Alan Davie (1957-1959); and admired the experimental nature of James Kirkup's poem 'A Correct Compassion,' written during his Gregory Fellowship after witnessing a heart operation at first hand. (6) He valued and recognised the importance of contact with "real artists" that the Gregory Fellowship scheme afforded students at Leeds.

Harrison also came to know Jon Silkin very well, and through his contact with him became an editorial advisor on the revived Stand magazine in 1960. He remembers his activities in this role as selling the magazines with Silkin around Leeds pubs, and reading and discussing a lot of poetry. Although the selling techniques were slightly different, in many ways this was a continuation of his experience on the editorial board of Poetry and Audience. Silkin and Harrison had many discussions about poetry, and although they didn't always agree, this was no doubt important in Harrison's development as a poet. Like Silkin and Geoffrey Hill, he was interested in the war poets; his recognition that some of the strongest and most direct poetry is produced in extreme situations, such as war, perhaps owes much to their discussions. Another important influence, was Harrison's friend and contemporary, James Simmons, with whom he often stayed in his flat on Blenheim Square. Simmons was also an exponent of directness in poetry, perhaps as a result of his interest in song. Both influences can be seen in Harrison's own war poetry, written in response to the First and Second Gulf Wars, and as a 'poet-in-the-field' for The Guardian during the war in Bosnia.

In 1962, Harrison took up a post as an English lecturer at Ahmado Bello University in Zaria, Nigeria. Simmons joined the staff shortly afterwards; Arthur Creedy, formerly a lecturer in the Department of English Literature at Leeds, became their departmental head in 1963. Simmons and Harrison went on to collaborate on Akin Mata, a Nigerian version of Aristophanes' Lysistrata incorporating music and dance. Creedy was perhaps influential in Harrison inviting John Heath-Stubbs to the University, having become a friend of Heath-Stubbs when he held the Gregory Fellowship in Poetry (1952-1955). Heath-Stubbs became an external examiner for the English Department.

Whilst in Nigeria, Harrison's first pamphlet of poetry Earthworks, was published under Jon Silkin and Andrew Gurr's Northern House Pamphlet Poets imprint from the Department of English Literature at Leeds. (7) Harrison and Silkin would come into contact once again in the late 1960s in Newcastle. Both relocated to the city having been offered support from the Northern Arts Association: Silkin accepted their financial support for Stand and moved in 1965; Harrison became the first Northern Arts Association Literary Fellow in 1967 after spending a over a year in Prague, and has kept his roots in the city ever since. Harrison edited Stand for a period in the late 1960s when Silkin took up a residency at the University Iowa, and produced a special issue on new Czech writing in 1969 (Stand, vol. 10, no. 2 ). 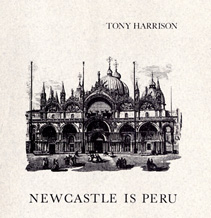 Tony Harrison's first major poetry collection, The Loiners, was published in 1970, and was awarded the Geoffrey Faber Memorial Prize. Since this time he has worked prolifically as a poet, dramatist and film-maker. He has won awards for his work in all of these areas, most recently the Wilfred Owen Award for his war poetry. For Harrison, poetry is the focus, or conduit, whether working on poems, plays or films; in his mind they are, "part of the same quest for a public poetry." (8)

(3). The Wolfenden Report, published in September 1957, recommended the decriminalisation of homosexual activity between consenting adults in private.

(7). Northern House also published a second edition of Harrison's Newcastle is Peru in 1974. This poem was originally published by the Eagle Press in 1969.