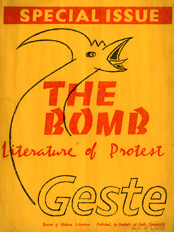 Poetry and Audience is perhaps the most well known student literary periodical to have been published at the University of Leeds. However, it was not alone; many periodicals devoted to literature and the arts were published by Leed students, perhaps bearing witness to the creative environment on campus. This page describes just some of the magazines produced by Leeds students during the period 1950 to 1980, including Sixty-One and Ikon. 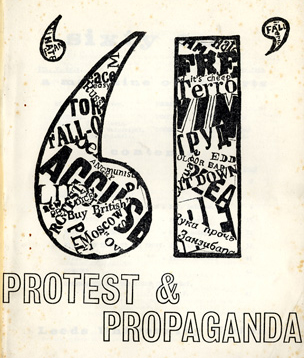 Sixty-One was founded by undergraduates David Kerrison and Terry Parkinson, later joined by Douglas Sandle, in February 1961 as a magazine for contemporary creative arts. Part of a group including students from the departments of English (eg Kerrison and Parkinson), Sociology, Art, Psychology (eg Sandle) and Politics, they looked on Poetry and Audience as something of a "tool of the establishment" due to its close connection with the Department of English; and saw the poetry published within its pages as "genteel and pedestrian," and out of touch with modern influences on campus such as the Beat Generation, jazz and radical politics. (1)

Kerrison completed his studies in the summer of 1961, and recollects that by the time he left the University, Sixty-One had become "a good platform for a more radical presentation of poetry and the contemporary arts." (2) He and his co-editors had been encouraged in their venture by the Gregory Fellow in Poetry, William Price Turner, who also contributed to the magazine.

Sixty-One's publication continued for some years after the departure of its founding editors. Jeffrey Wainwright joined the magazine's editorial board as an undergraduate in 1963; Jon Glover, then an undergraduate in English and Philosophy, joined the editorial board in 1964, and before the end of that year had taken over Sixty-One's editorship. Both Wainwright and Glover contributed frequently to the magazine, as did their friend and contemporary, Ken Smith. The magazine published a mixture of poetry, short stories and critical articles touching on both literature and politics, and the links between them. Both Ken Smith and Gregory Fellow David Wright were interviewed for the magazine; special issues were produced in February 1965 and March 1966 to mark the occasion of the Leeds University Arts Festival; a 'Protest and Propaganda' issue published in May 1965 included a scathing editorial on the American presence in Vietnam. 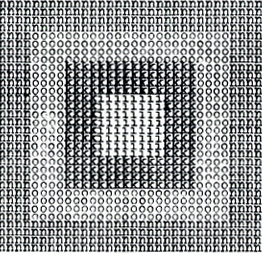 Ikon magazine was established in 1964 by Sixty-One founding editor Douglas Sandle, and published several issues between the autumn of that year and 1967. Its scope was wide-ranging and perhaps more experimental than Sixty-One. Book reviews covered subject matter including politics, sociology and psychology, as well as art and literature; and the magazine embraced new creative forms such as concrete poetry, its third issue featuring a cover designed by one of the leading exponents of the field, Dom Sylvester Houedard. Editorial staff and contributors were sometimes involved with both magazines: Sandle continued to contribute to Sixty-One; Jeffrey Wainwright was a member of the Ikon editorial committee in 1966 as well as being involved with editing Sixty-One; Jon Glover contributed poems to both magazines; all three contributed to Poetry and Audience. Like Sixty-One, Ikon also issued an Arts Festival Edition in March 1966. Focussing on the festival's theme of violence in the arts, this edition included the feature '10 Poets on Violence,' with contributions from Jon Silkin, Ken Smith, Roy Fisher and others. The penultimate issue of the magazine (spring 1967), also included poems by Smith and Silkin, as well as David Wright, and an article by Herbert Read. 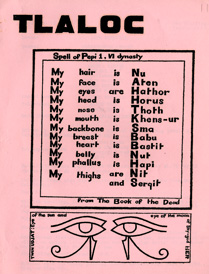 Tlaloc was founded by Cavan McCarthy, a librarian at the Brotherton Library, with the aim of providing an, "open forum for modern poetry." (3) First issued in December 1964, for a time it acted as a bi-weekly supplement to Ikon; Douglas Sandle was a member of the editorial board. By the time the second series of magazine was issued in 1965 (Tlaloc 7), it had become independent of Ikon and was published by McCarthy under the Location Press imprint; it was later published from Blackburn and then London when McCarthy relocated. The main emphasis of Tlaloc was on concrete and visual poetry; contributors included Dom Sylvester Houedard, Ian Hamilton Finlay and Angela Carter, amongst others. The last issue (Tlaloc 22) was published in 1970. 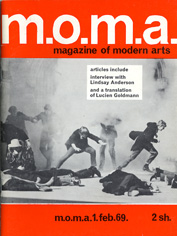 Just over eighteenth months after the last issue of Ikon, Douglas Sandle founded a new magazine, also published from the University of Leeds. M.O.M.A. (Magazine of Modern Arts) was, "intended to fill the gap" left when Ikon (described as a "general arts magazine") folded. (4) The first issue to be published coincided with the fifth Leeds Student Arts Festival in February 1969. 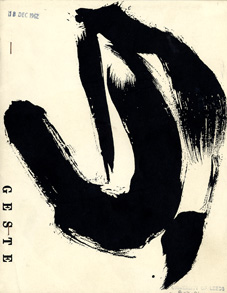 Geste was issued by the University of Leeds' French Society, first appearing in 1956. Despite its origins as a magzine produced by a departmental society, Geste's stated aims were, "to provide a vehicle which will carry both serious verse and prose and also academic and humourous work" and; "to stimulate interest in modern languages and literatures generally." (5)

The magazine appears to have been successful in its aims. Many of its issues were themed or devoted to particular literatures, including African, Australian, Spanish and German literatures; contemporary poetry in English; and modern Jewish writing. Contributors were mainly drawn from the students and staff of the University, and included Robin Skelton, Wole Soyinka and Geoffrey Hill amongst many others. Jon Silkin first published translations of Israeli poet David Rokeah in Geste, which were later included in his collection The Re-Ordering of the Stones (1961). He may also have been influential in securing Emanual Litvinoff's contribution to the issue on modern Jewish writing. The Gregory Fellow in Sculpure, Hubert Dalwood (1955-1959), contributed an article to the 'Lolita' issue; Trevor Bell, Gregory Fellow in Painting (1960-1963), designed the cover that was used throughout volumes 7 and 8 (1961-1963). 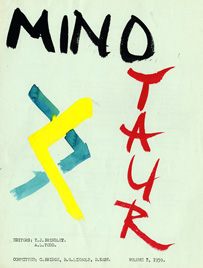 Minotaur was a magazine of poetry and prose founded by Terry Brindley, a student in the Department of English Literature, in 1959. It appears to have mainly published creative work by undergraduates at Leeds University, although it also published articles by staff, including sociology lecturer John Rex's 'Intellectuals in the Provinces' (vol. 1, no. 3, 1959).

Published from the Department of English Literature in the 1950s and 1960s.

A magazine of poetry, prose, drama and criticism.

A magazine, "created to satisfy a deficiency in the output of specific criticism of English Literature," to include all literatures written in English. The first (and possibly only) issue, published in the early 1960s, included an article by Norman Talbot on the Australian poet Kenneth Slessor.

Stride was also the title of a magazine issued by the Leeds University European Society, which appears to have survived longer than its literary counterpart.

The Leeds Larynx was first published in spring 1973 as a general magazine for the arts, featuring new poetry and prose, and articles on "artistic ventures." The first issue included a contribution from 'The Group' poet Peter Porter ('Between Two Texts'); and the second a poem by Vernon Scannell. It is unclear as to whether The Leeds Larynx survived beyong its second issue. 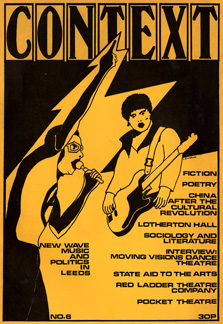 Context was founded in 1978 as an independent arts magazine. It defined its base as West Yorkshire, but had inherent links with the School of English, where its editorial board held meetings up to twice a week during term time. Ken Smith, who was Yorkshire Arts Association in Creative Writing at the time Context was established, contributed short stories to its first and second issues. The third issue featured an interview with Hugh Maxton (W.J. McCormack), who was on the staff of the School of English at the time, along with a selection of his poems. Paul Mills contributed a short story to the spring 1979 issue, during his tenure of the Gregory Fellowship in Poetry. The magazine continued to publish into the early 1980s.