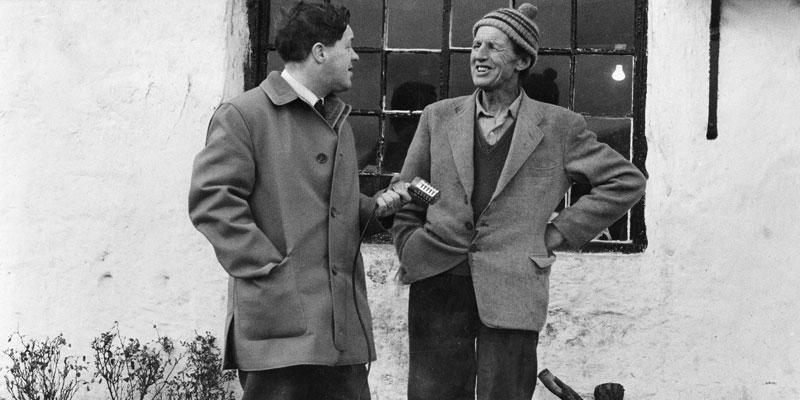 Do you take snap, bait, tommy or a packed lunch with you to work?
Is it a spell, a spelk or a splinter that you get in your finger?
Do you ask for scraps, craps, bits or scratchings at a fish and chip shop?

Between 1946 and 1978, fieldworkers from the University of Leeds travelled to over 300 locations and recorded the language and lifestyles of hundreds of speakers from across England. This enormous endeavour was known as the Survey of English Dialects and remains the most famous and complete survey of the dialects of England ever undertaken.

Leeds University Library's Special Collections now looks after the rich resources generated by this huge national study and subsequent important work carried out by students and staff at the Leeds Institute of Dialect and Folk Life Studies (1964-1983).

This nationally important archive is called the Leeds Archive of Vernacular Culture. It is currently inaccessible to a wider public.

We aim to enable people to uncover their own dialect inheritance and cultural heritage, and to share their own memories, language and stories for the benefit of current and future generations, by:

A new national partnership came together in 2017 to launch the Dialect and Heritage: The State of the Nation project, funded by the National Lottery Heritage Fund. The partners are:

Together we hope to celebrate language – past and present – and bring this archive collection, full of our dialect heritage, back into communities where it truly belongs.

October 2017: The Dialect and Heritage project was awarded £65,600 by the National Lottery Heritage Fund thanks to money raised by National Lottery players. This grant helped the partnership to develop plans for the project.

July and August 2018: We took dialect on tour around the country.

September 2018: We teamed up with Heritage Open Days to bring a special free event to the public: Food for Thought…Dialect Discovery Day.

May 2019: We submitted our funding application to the National Lottery Heritage Fund to enable us to start work on celebrating and bringing dialect heritage out of the archives and back into partner museums and communities!

November 2019: Huge news! We were awarded £530,000 from the National Lottery Heritage Fund to extend our work, revisiting the most comprehensive survey of England’s dialects ever undertaken. The funding will allow us to update the survey and make it available online for the first time.

January 2020:  The Dialect and Heritage Project began, with the appointment of a Project Archivist, Collections Assistant, Digitisation Assistant and Project Intern within the Library's Special Collections.  Through the team's digitisation, indexing and cataloguing work, the Leeds Archive of Vernacular Culture will become much more accessible.

February - March 2020: The digitisation of the photographic slides featuring within the Leeds Archive of Vernacular Culture is completed, with almost half of the collection’s photo card and loose photographs also digitised. As part of the nationwide Unlocking Our Sound Heritage programme, the British Library completes its digital transfer of the open reel and audio cassette tapes held within the Leeds Archive of Vernacular Culture, of mainly Institute of Dialect and Folk Life Studies recordings. Almost half of the Survey of English Dialects gramophone recordings held within the archive are also digitised. The indexing and cataloguing work continues, and a Project Manager is appointed to maintain communications across the project partnership and co-ordinate the delivery of the different elements of project work.

2021: In spite of the pandemic, the project managed to keep moving forwards!
All photographs in the Leeds Archive of Vernacular Culture were digitised, with over 1000 available online, and 97 of the Survey of English Dialects fieldworkers’ response books. The LAVC search page went live, with the ability to search the collection by people, subject, and key terms, as well as a map-based search allowing you to explore the archive geographically.
Five Engagement Officers were appointed, each based at one of our five partner museums. We also appointed a Project Assistant to assist communications both across the project and through our social media accounts - @DialectHeritage on Twitter and @DialectandHeritage on Instagram.

2022: Our website https://dialectandheritage.org.uk/ and new online survey were launched in April 2022 to national acclaim and a good deal of media attention. The website contains a number of different activities alongside the survey including an audio map of 1950s recordings from the original Survey of English Dialects and themed stories from our collection about celebrations, foodstuffs and different regions of the country.
Our Engagement Officers have been hard at work around the country at their partner museums and at local events to bring dialect to the general public, with fantastic results. Details of upcoming events can be found on the relevant partner museum website.
We have also started recording Oral History interviews with members of the public; alongside sound recordings and survey responses these interviews are intended as a means of recording modern dialect for posterity.
New digitised material continues to be published on the LAVC website, aided by the appointment of our new Collections Assistant.