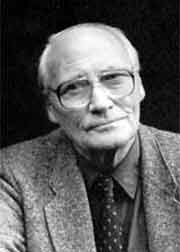 Vernon Scannell became a casual student at Leeds University in the late 1940s following a chance meeting with Bonamy Dobrée in a city centre pub. His time in Leeds was a great influence on the development of his poetry.

Vernon Scannell was born John Vernon Bain on 23 January 1922 in Spilsbury, Lincolnshire. He left school aged 14 to work in an accounting firm; and enlisted in the Army in 1940, aged 18, following the outbreak of the Second World War. During the war he saw action in the Middle East and France, and was seriously wounded near Caen (Normandy) in 1944. He spent the remainder of the war recovering. Shortly after the announcement of VE-Day Scannell deserted, disillusioned and brutalised by army life; it was at this point that he changed his name to Vernon Scannell. He spent the next two years effectively on the run.

Whilst attempting to survive in London with neither identity papers nor ration card, Scannell undertook various cash-in-hand jobs and became involved in professional boxing. He also became acquainted with the Soho bars frequented by poets and artists, and in the Fitzroy Tavern met a medical student from Leeds who convinced him that Leeds would be a safer city than London in which to lie low.

Scannell admitted to hating Leeds at first, commenting on the polluted air and the "drab melancholy that the town seemed to breathe out," and noting "I had not known that such slums existed any more." (1) However, he soon developed an affection for the city, and looked back to his time there as "culturally stimulating," referring to the: "university, regular symphony concerts at the Town Hall, lunch-time recitals at the museum, a repertory cinema and a theatre ... [and] plenty of civilised people." (2) He rented a room in Francis Street, Chapeltown, in the building that housed the headquarters of the North Leeds Communist Party, and found work coaching as a private tutor. He frequented the pubs off Briggate in the city centre, including Whitelocks, meeting Kenneth Severs (then a PhD student, poet, and editor of The Northern Review; later head of the BBC in Leeds). Severs introduced him to others connected with literature and art at the University, including Bonamy Dobrée, G. Wilson Knight, Wilfred R. Childe and Jacob Kramer. Dobrée arranged for Scannell to attend lectures and to join one of Wilson Knight's tutorial groups. 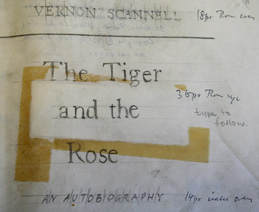 Title-page marked up for printing from typescript ...

Title-page marked up for printing from typescript ...

The modest fee that Scannell paid for his casual studies entitled him to membership of the Students' Union, and he joined the University Boxing Club. It was also during this period that his poetry began to be accepted for publication in periodicals, including Tribune and Adelphi. Three of his poems were included in the Leeds University Verse 1924-1948 anthology. Writing for The Listener in 1963, Scannell says of Leeds: "it was the place where I took my first tottering steps towards becoming the real writer that I hope one day to be." (3)

In the summer of 1947, Scannell was arrested for desertion and taken to Aberdeen for Court Martial. Dobrée and Wilson Knight both volunteered to speak or write to the President of the Court Martial on his behalf. (4) Scannell was remanded, then sent to the military psychiatric hospital at Northfield near Birmingham. He was soon discharged, and in late 1947 returned to Leeds, renting a room on Cromer Terrace near the University (now part of campus) and working first in the editorial department of publishers E.J. Arnold and Son, and then teaching in a preparatory school on the outskirts of the city. His first collection of poetry, Graves and Resurrections, was published in 1948.

In the spring of 1949, Scannell returned to London. He worked for an advertising agency, as a dishwasher, and as a 'boxing illusionist', before being appointed to a post teaching English and history at a school in suburban West London. Wilson Knight provided Scannell with a "glowing if unmerited testimonial" on his teaching ability. (5) The job enabled him to focus more on his writing, and by 1953 he had published his first novel, (The Fight), a second collection of poems (The Wound and the Scar), and had written a radio script on fairground boxing. Also in that year, his poems were included in the first PEN New Poems anthology, alongside John Heath-Stubbs, Thomas Blackburn, Michael Hamburger and others.

Scannell resigned from his teaching post in 1952. He began writing a column for Truth, and also undertook editing and lecturing work for the National Anti-Vivisection Society. He married in 1954, and following the birth of the first of six children, moved to Limpsfield, Surrey, where he took up a teaching position at Hazlewood School. He continued to write and broadcast, and in 1957 published a third collection of poems, A Mortal Pitch. He was also featured in Dannie Abse and Howard Sergeant's Mavericks anthology, alongside Jon Silkin, William Price Turner, David Wright and others. 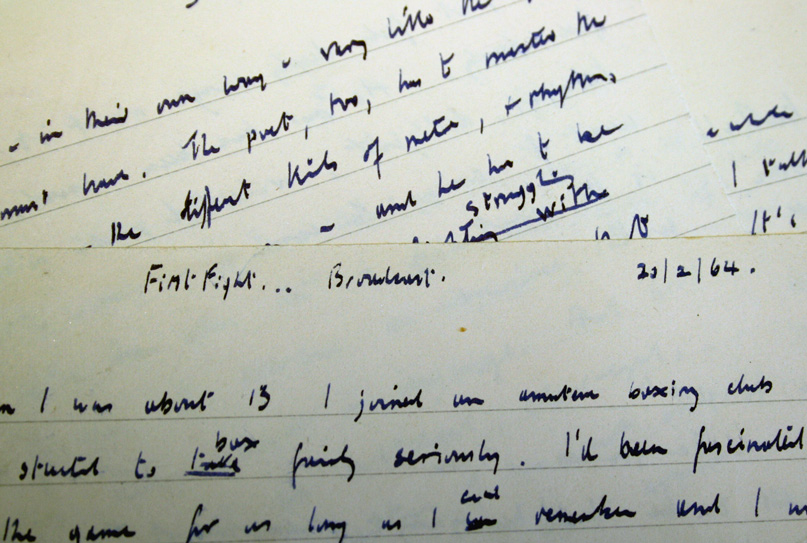 Scannell continued to write and broadcast throughout the 1960s and 1970s. In 1960, the BBC Radio producer Robert Gittings commissioned him to write a poem about boxing that would appeal to a young audience. The result was 'First Fight,' broadcast on BBC Radio for Schools in 1964. Scannell also became involved in poetry readings including Jeremy Robson's Poetry and Jazz events, and in 1965, the Poets in Public readings at the Edinburgh Fringe Festival (which also featured Jon Silkin and Ken Smith). Two autobiographical volumes were published in the 1970s: The Tiger and the Rose (1971) and A Proper Gentleman (1977). He also held the Southern Arts Association Writing Fellowship from 1975 to 1976, and held residencies in the late 1970s at the Shrewsbury School and King's School, Canterbury.

In 1979, Scannell returned to the Leeds area, living first in Spencer Place, Chapeltown, before moving to Otley in the 1980s. He continued to write into his eighties, publishing over a dozen further collections of poetry, poems for children, novels, and a third autobiographical work, Drums of Morning (1999). A pamphlet of new poems, Last Post, was published by the Shoestring Press in 2007.

(2). Vernon Scannell, The Tiger and the Rose.

(5). Vernon Scannell, The Tiger and the Rose.

Vernon Scannell, literary papers together with an autograph letter