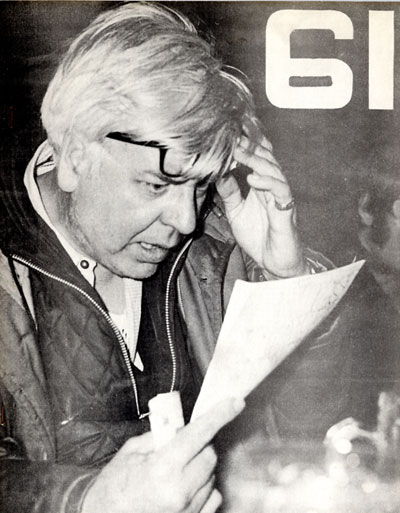 David Wright was the second Oxford graduate to become a Gregory Fellow in Poetry. His poetry discussion sessions, often in The Fenton pub, were extremely popular, on occasion attracting as many as 30 students.

David John Murray Wright was born on 23 February 1920 in Johannesburg, South Africa. After contracting scarlet fever, he became deaf aged 7, and began to write poetry shortly after. (1) Wright emigrated to England with his family when he was 13, and attended the Northampton School for the Deaf. In 1939, he went on to read English at Oriel College, Oxford; and in his third year at the University became acquainted with the group of poets including Sidney Keyes and John Heath-Stubbs. Although introduced at Oxford, it was following Wright's move to London in 1942 that his friendship with Heath-Stubbs developed.

Shortly after moving to London, Wright took up a job with the Sunday Times, working on its staff until 1947. During this time he frequented the Soho pubs popular with writers, painters and musicians, meeting and making valuable friendships with Heath-Stubbs, George Barker, and W.S. Graham, amongst others. He later described late-1940s Soho as, "the lineal successor of pre-war Montparnasse." (2) On leaving the Sunday Times, he went to live in Cornwall with George Barker's nephew, John Fairfax; Heath-Stubbs was also in Cornwall at this time. His first poetry collection, Poems, was published in 1947 by Editions Poetry London and won an Atlantic Award for literature. After a year in Cornwall, Wright moved to Italy; and in 1951 he met and married the actress Phillipa Reid.

Wright continued to publish poetry but also became involved in editing and translating. He edited The Forsaken Garden (an anthology of Victorian verse; 1949) and the Faber Book of Twentieth Centure Verse (1953) with John Heath-Stubbs; his translation of Beowulf, published by Penguin in 1957, is still in print. He co-edited the magazine Nimbus with Tristram Hull between 1955 and 1957, and the quarterly literary and arts review X with Patrick Swift from 1959 to 1962. in 1960, he moved to Braithwaite, Cumbria, where he became friends with Norman Nicholson. 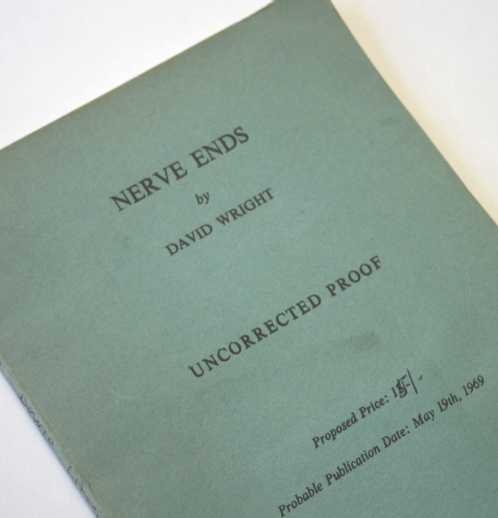 Between 1965 and 1967, Wright held the Gregory Fellowship in Poetry at the University of Leeds. He was recommended for the position by Professor Douglas Grant of the School of English, who had joined the Gregory Fellowships Advisory Committee following the death of T.S. Eliot. Wright had, in fact, applied for the Fellowship some years previously. Writing to Bonamy Dobrée in December 1957, he enclosed advance proofs for his collection Monologue of a Deaf Man, stating: "as the book contains my two most ambitious efforts so far, that, should I be at all in the running for the Leeds Poetry Fellowship, they may help." (3)

During his time in Leeds, Wright held weekly discussion sessions on poetry with students, often meeting in the Fenton pub near to the University. He later stated that this was an attempt to reproduce his own poetic education, which had been: "partly derived from the conversations of poets, painters, musicians, &c who used to meet in Soho pubs." (4) According to Wright, these sessions were sometimes attended by as many as 30 students. He also frequented the Students' Union, and contributed to and gave editorial advice on Poetry and Audience. Wright had, in fact, had poems published in Poetry and Audience in the 1950s. (5) Whilst at Leeds, Wright was interviewed for Union News and the student literary magazine Sixty-One; and with Phillipa Reid, made a recording for the Poetry Room. He also inaugurated a system for the recording of student poetry.

David Wright died on 28 August 1994 at his step-daughter's home in East Sussex.

(4) Information from Wright's responses to a survey on Writers in Education conducted by Alan Brownjohn for the Arts Council in 1979 (Leeds University Library Special Collections).

David Wright, autograph manuscript and typescript drafts of poems, with a letter to Paul Potts