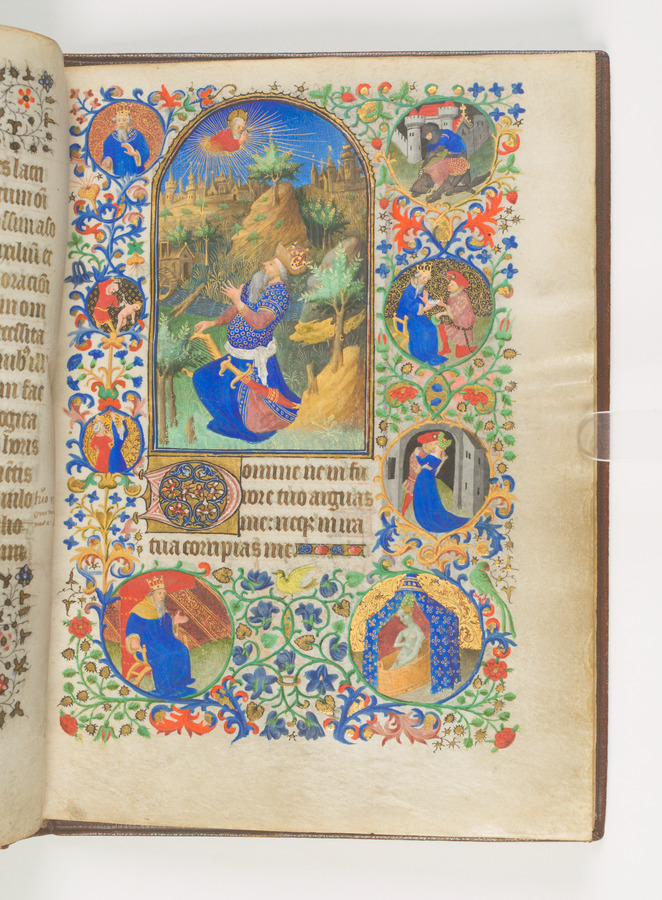 The collections hold 11 medieval manuscripts illuminated in France. The most remarkable example of French illumination is found in a fragmentary Parisian book of hours that contains only four gatherings: a calendar; Gospel extracts and the Obsecro te prayer; the seven Penitential Psalms; and the Penitential Psalms with a litany of the Saints (BC MS 1).

No indication survives in the manuscript to identify its patron; the coat of arms on the shield was left unpainted.

The only large miniature present, seen here, represents King David (fol. 21r) and is painted in the characteristically soft brushwork of the Bedford Master (identifiable possibly as Haincelin of Haguenau). The illuminator used fine tonal transitions of colour for modelling, in the near absence of line.

A skilled associate seems to have painted the surrounding medallions that narrate the story of David and Bathsheba, as well as the small miniatures of the occupations of the months and the signs of the zodiac in the calendar (see for example February).

One or more assistants are likely to have been responsible for the cruder and more linear historiated borders that decorate the outer margins throughout the manuscript.

The manuscript can be dated to the 1420s, during the later stages of the Hundred Years War, when the English occupied Paris. While local illuminators continued to work for their French patrons, they also acquired new masters from the English camp, most notably the English Regent of France, John, Duke of Bedford, after whom this illuminator has been named.

The decorative, International Gothic style exemplified by this manuscript was in fashion at the turn of the 15th century in Paris, Milan, Prague, and every important court throughout Europe