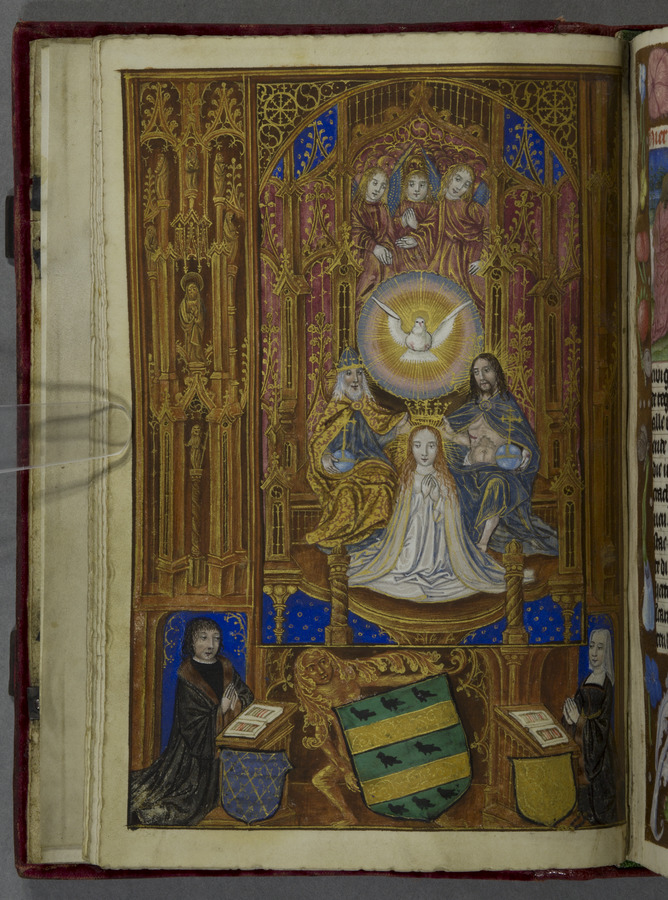 BC MS 7 is a richly illuminated book of hours written in Dutch. The provenance of this book has not been published before. It was most probably made for a couple from the van Cuyck family, who are portrayed in the miniature of the Coronation of the Virgin shown here (fol. 17v)

The feast days in the Calendar indicate that the manuscript was prepared for use in the diocese of Utrecht, while the order of the texts suggests it was written in Delft.

During the 15th century the van Cuyck family owned significant amounts of land in Culemborg, where they pursued successful careers as mayors, alderman and land agents. The patron of the manuscript might have been Anthonis, whose marriage to a girl from Utrecht in 1497 enabled the van Cuyck family to join the city's elite.

The miniature may yet hold one other clue as to the identity of the patrons. The elf holding the identifying coat of arms is a "moss person", a sacred child-size being from Germanic folklore who is clad in moss and intimately connected to trees. In Dutch such a moss person was called "Trintje", also a pet name for Katherine. Could its inclusion and deliberate gaze toward the patroness be an allusion to her identity as a Katherine?

The manuscript was painted around 1500 by two different illuminators. The Coronation and seven further full-page miniatures - painted on singletons and inserted before the main text sections - are in the distinct style of one of the Masters of the Dark Eyes. This was the most prolific group of Dutch illuminators at the time, which also enjoyed the patronage of Margaret of Austria.

The more innovative and accomplished images in the manuscript are, however, the 48 small and very detailed historiated initials and column miniatures attributed to the so-called Master of the Adair Hours.