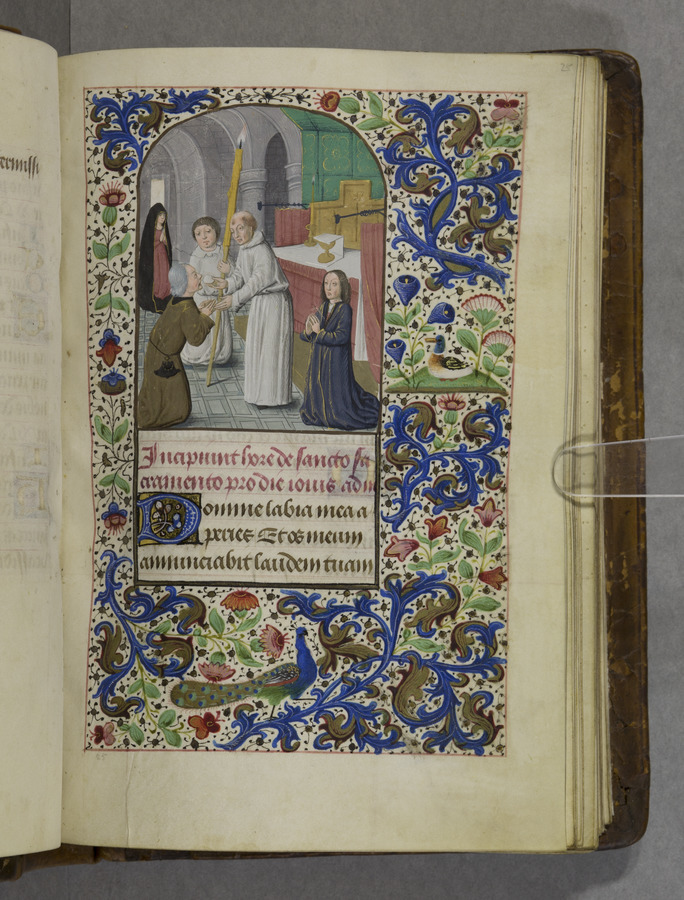 BC MS 4 is a luxurious book of hours made around 1450-55 for Antoine de Crèvecœur, chamberlain of Charles, Count of Charolais, later bailiff of Amiens for the duke Charles, then seneschal and governor of Artois (1477-91) and bailiff of Arras (1483) for Louis XI (see the work of Marc Gil).

The 30 original miniatures were illustrated by the Mansel Master, an innovative illuminator who worked in the Amiens tradition. These include a remarkable early portrait of St Bernard of Siena (fol. 157v), who had only recently been canonised in 1450.

The manuscript passed through the hands of Hughes of Mazijnghem - a nobleman in the service of Jean de Bourgogne, bishop of Cambrai - to an anonymous couple depicted in the miniature of the Mass seen here (fol. 25r), around 1470-75.

Eight new miniatures and accompanying texts were added by two skilful illuminators from Bruges. Willem Vrelant was responsible for the St Gregory inserted at the beginning of the manuscript (fol. 1v), while the rest of the new images, including a second Annunciation accompanying a rosary prayer (fol. 37r), have been attributed to the so-called Master of Edward IV (possibly Adrien de Raet).

These amendments personalised the manuscript to the tastes of its new owners, and made it more suitable for use by its first female owner. It now included new prayers in feminine word forms, and a female supplicant in the border of the new Annunciation (fol. 45r), thus juxtaposing the original Annunciation (created for the eyes of the original male patron) with its marginal decoration of a hybrid exposing a nude female upper body.