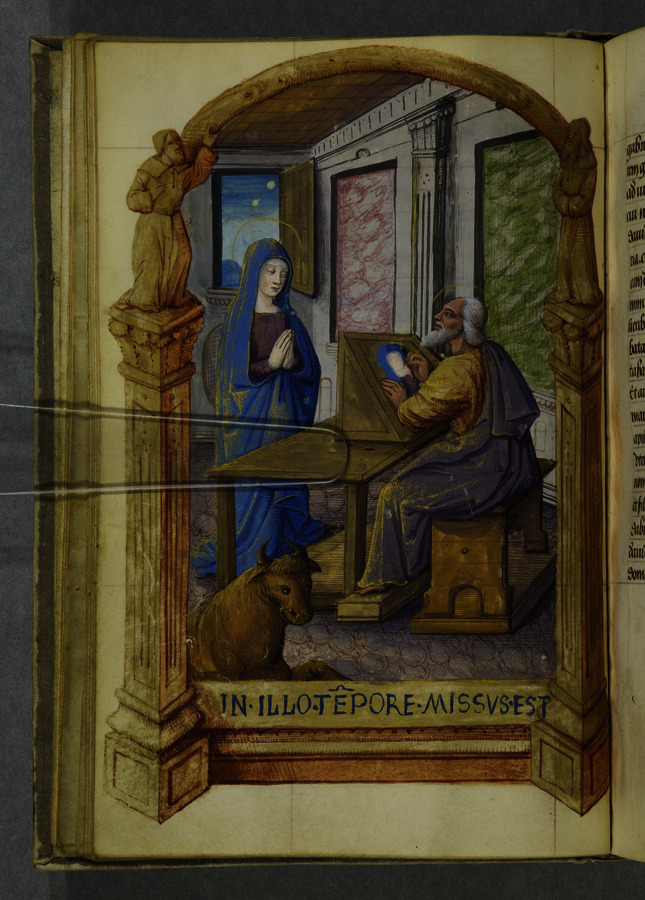 Special Collections holds another exceptional Parisian manuscript, a combined Breviary and Hours (BC MS 2). It was probably made for one of the canons of Notre-Dame of Paris, as suggested by its textual and visual contents.

Its illumination demonstrates how the style of the Bedford Trend developed, and stayed in fashion, even after its original inventor and his important English patrons had disappeared from the capital.

A further book of hours (BC MS 8) was made around 1490 for the Bouer family of Bourges, who were active in the city administration and the Royal Mint. The miniatures can be attributed to two local illuminators who lived only a few hundred metres from the house of the Bouers: Jacquelin de Montluçon and the so-called Master of Spencer 6.

The techniques of the two artists are different. In his piece St Luke, the Evangelist (Fol.14v), Jacquelin mastered finer or more variable brushwork and mixed his colours more elaborately (see image). Documentary evidence and extant works reveal Jacquelin as a painter accustomed to working on a larger scale, on altarpieces and stained glass.

We also have a mid-15th century Parisian book of hours (BC MS 5), intended for use in England, as well as two other smaller books of hours (BC MS 3 and BC MS 6) that were illuminated by artists from the north of France and were destined for use in the Southern Netherlands (around the Maastricht area).

The merchant mark of the original owners, which includes their initials AJ and VH, is painted in the manuscript. On the same page, the male supplicant depicted facing the Virgin and Child appears to be generic rather than a specific portrayal, perhaps suggesting that the manuscript was bought ready-made.

Another outstanding French work in the collection is a nearly 18 metre long scroll that chronicles the integrated pagan and biblical history of the world, from the Creation to the reign of Louis XI of France (BC MS 100). It was made of 39 membranes of parchment and skilfully illuminated with 64 roundels, undoubtedly for a member of Louis's court.