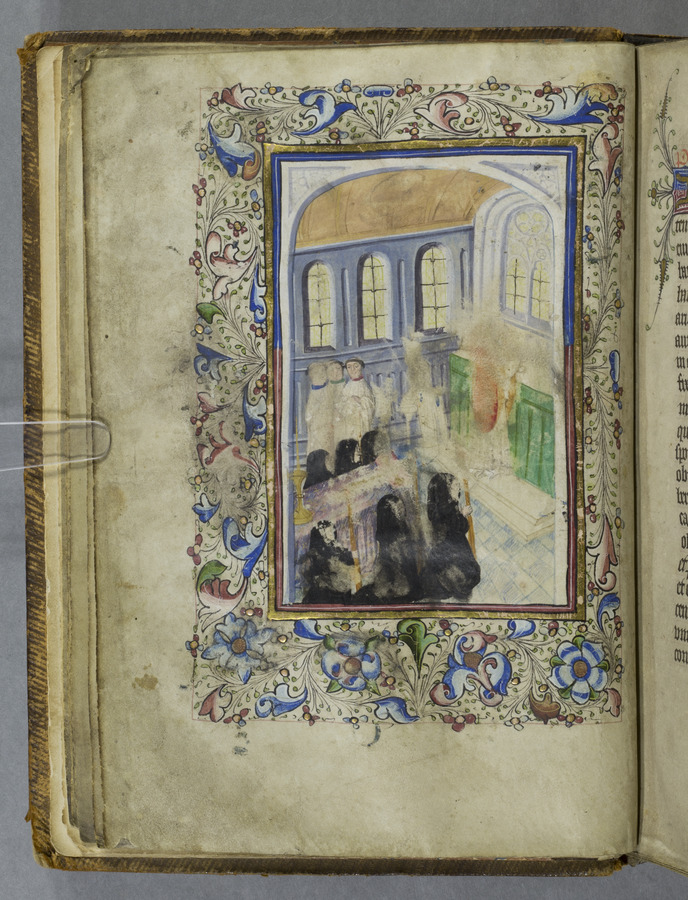 Ripon Cathedral MS 1 is a Bible painted around 1260. The biblical books and divisions of psalms are introduced with 82 historiated initials in colours on gold grounds (datable stylistically by the angular broad folds of the draperies, demonstrating French influence). Ornamental bars, on which birds and grotesques are perched, extend from the initials to the margins. The Psalm initials introduce both English and French schemes of iconography.

The book of hours known as the Braddyl Hours (BC MS 15) was named after its 16th century owners from Whalley Abbey in Lancashire. It was probably painted in London in the 1470s by an English illuminator. There is a book of hours by the same illuminator in Cambridge University Library (Kk.2.7).

A collaborator painted the borders, including a scene on the first page of the Hours of the Virgin in which a green parrot is used to symbolise the Virgin (fol. 24r). The parrot's cry was supposedly "AVE" and its impermeable feathers paralleled the purity of the Virgin.

All the main miniatures in this manuscript were excised,except one funeral scene, which is badly smudged (see image). References to various popes and Saint Thomas Becket, as well as rubrics and entire sections of texts, were scrubbed or struck out.

The deletions were carried out in accordance with royal injunctions of 1535-1538, seemingly by the Braddyl family. It cannot be assumed that these excisions were made in order to ensure the book could remain in devotional use; texts in books of hours were often deconsecrated in this manner, particularly in the 16th and 17th centuries in England and France. They were turned into secular heirlooms in which family history could be recorded. Births and deaths of several Braddyl family members were recorded in this copy, while the original purpose of the book may have been overlooked.