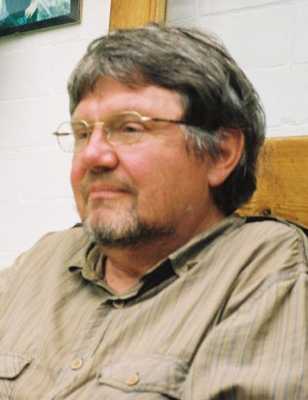 Paul Mills was the last Gregory Fellow in Poetry, holding the position from 1978 to 1980. His contact with Leeds students was an important factor in his own development as a teacher of Creative Writing.

Paul Mills was born in Cheshire in 1948. He attended Sir John Deane's Grammar School in Northwich, before going on to study English at the University of Edinburgh. He met John Heath-Stubbs following a poetry reading during his time there. His first experience of Eric Gregory as a patron of the arts came in 1970 when he received a Gregory Award from the Society of Authors. The following year, some of his poems appeared alongside those of Roderick Watson and Valerie Simmons in Trio: New Poets from Edinburgh (New York: New Rivers).

After graduating, Mills worked as an English teacher at a Birmingham comprehensive school, before going on to hold a series of writing fellowships. His first collection of poetry, North Carriageway, was published by Michael Schmidt's Carcanet Press in 1976, the year in which he became Arts Council Creative Writing Fellow at the University of Manchester. He later described this time as, "a period of prolific writing." (1) Michael Schmidt, then a lecturer at Manchester, was to become a close friend, and in 1978 published Mills' second poetry collection, Third Person. During his time in Manchester, Mills held regular poetry seminars with students as well as one-to-one sessions; this experience would later prove beneficial to his role as a Gregory Fellow in Poetry.

From 1977 to 1978, Mills held the Southern Arts Association Creative Writing Fellowship at Christ's Hospital School in Horsham, Sussex. He visited the School of English at Leeds during this year, where his future wife, Ruth Evans, was studying for a PhD. Ken Smith was Yorkshire Arts Association Creative Writing Fellow in the School at this time, and Geoffrey Hill had been promoted to a Professorship in English Literature; Mills became very much aware of the "strong literary culture" within the School. (2) Evans passed on details of the Gregory Fellowship in Poetry to Mills when it was advertised following a two-year freeze in funding. He applied for the position and was interviewed by a panel which included Hill who, Mills later learned, was "a decisive factor in [his] appointment." (3)

Paul Mills was the last Gregory Fellow in Poetry, taking up the position in October 1978. He held workshops and one-to-one sessions on poetry, spending much of his contact time with individual students. He also organised public sessions involving the School of English staff where lecturers and, occasionally, guest speakers, would introduce a poet of their choice to students and read from their work. In addition, he undertook part-time teaching work for the University's Extra-Mural Department. Mills identifies his contact with the students at Leeds as rewarding and significant in terms of his development as a teacher of Creative Writing. (4) He has since published two books on the subject: Writing in Action (1996) and The Routledge Creative Writing Coursebook (2005).

During the first month of his Gregory Fellowship, Mills was commissioned to write a play on Herod and the slaughter of the innocents for the National Theatre in London. The play had to be written in a very short space of time for performance over the Christmas period. Whilst working on the script and attending rehearsals in London, he met Tony Harrison, and became aware of his connection with Leeds. Mills' play, Herod, was first performed by the National Theatre Company at the Cottesloe Theatre on 13 December 1978; the text of the play was published by Carcanet in the same year. 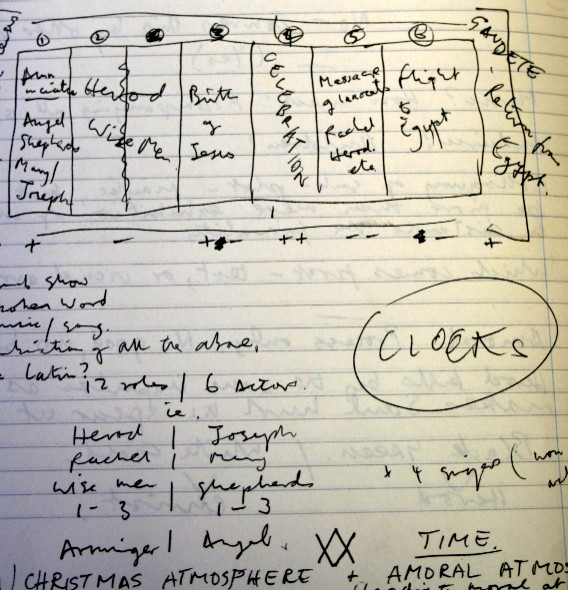 From a notebook containing a draft of Mills' play ...

From a notebook containing a draft of Mills' play ...

The Gregory Fellowship evidently allowed Mills time to write. During his second year, he wrote a version of the life of D.H. Lawrence for radio. It was produced and broadcast on a local network for Yorkshire schools, and the speakers and actors included members of staff from the School of English. He also wrote a number of short stories, some of which were published in Stand; and poems for Michael Schmidt's PN Review, including 'A Celtic Head.' (5) Geoffrey Hill was complimentary about this particular poem, which concerns a piece of Celtic sculpture from the Stonegate Road (Meanwood) area of Leeds, where Mills lived. Hill was an important influence on Mills' writing. Indeed, Mills later said of Hill and the University, "There was a succession of resident poets at Leeds but only one resident genius." (6) Other poets with whom he came into contact during his time in Leeds include Hugh Maxton and Robert Welch, the latter an exponent of the work of former Gregory Fellows Wayne Brown and Pearce Hutchinson.

Following his Gregory Fellowship, Mills spent a year on a Fulbright exchange near Santa Cruz, California, before travelling around the Western United States with his family. Following his return to England, in 1980 he took up a post in the Department of Literature Studies at the College of Ripon and York St John (now York St John University). He is now a senior lecturer in Creative Writing there. He has published two further collections of poetry, Half Moon Bay (1993) and Dinosaur Point (2000); and continues to write both poetry and drama.