Peter Redgrove was the first of two members of 'The Group' to become Gregory Fellow in Poetry. He introduced group-style workshopping to student poetry seminars; and was instrumental in defining the functions of the Poetry Room.

Peter Redgrove, poet, novelist, and dramatist, was born at Kingston upon Thames, Surrey on 2 January 1932. He attended Taunton School, and went on to read Natural Sciences at Queens College, Cambridge. During his time in Cambridge, he founded the student literary magazine Delta, which published early works by Ted Hughes and ran for some 20 years. He also became involved in 'The Group,' a cluster of poets brought together under the aegis of Philip Hobsbaum. Redgrove attended The Group's first ever meeting at Downing College in 1952, and was later described by Hobsbaum as having "dominated [its] earlier meetings." (1) Redgrove tried and failed to change to a degree in English, and eventually left university without a degree, taking jobs in London as a copywriter, scientific journalist and editor.

'The Group' restarted in London in 1955, "very much at Redgrove's instigation," according to Hobsbaum. (2) After meeting future Gregory Fellow Martin Bell outside Chiswick Library, Redgrove also introduced him to the meetings. Both remained key members of 'The Group' until leaving for Leeds, and Redgrove later introduced its workshopping practices to the weekly student poetry seminars he ran during his Gregory Fellowship.

1961 marked a turning point for Redgrove as he embarked upon a career path more focussed on creative writing. From 1961 to 1962 he was an Instructor in English at the State University of New York at Buffalo; then from 1962 to 1965 was the sixth poet to become a Gregory Fellow at Leeds. He had corresponded with Bonamy Dobrée from at least the mid-1950s and evidently valued his opinion of his poetry very highly. Indeed, Redgrove's letters to Dobrée suggest that he was an important influence in the development of his first book of poems, The Collector, published in 1959. (3) Dobrée appears to have first offered the Fellowship to Redgrove around 1959 to 1960; he supported Redgrove's application for the Fellowship in 1962, stating in a letter of recommendation to A.N. Jeffares that he would, "do very well indeed as Gregory Fellow." (4) 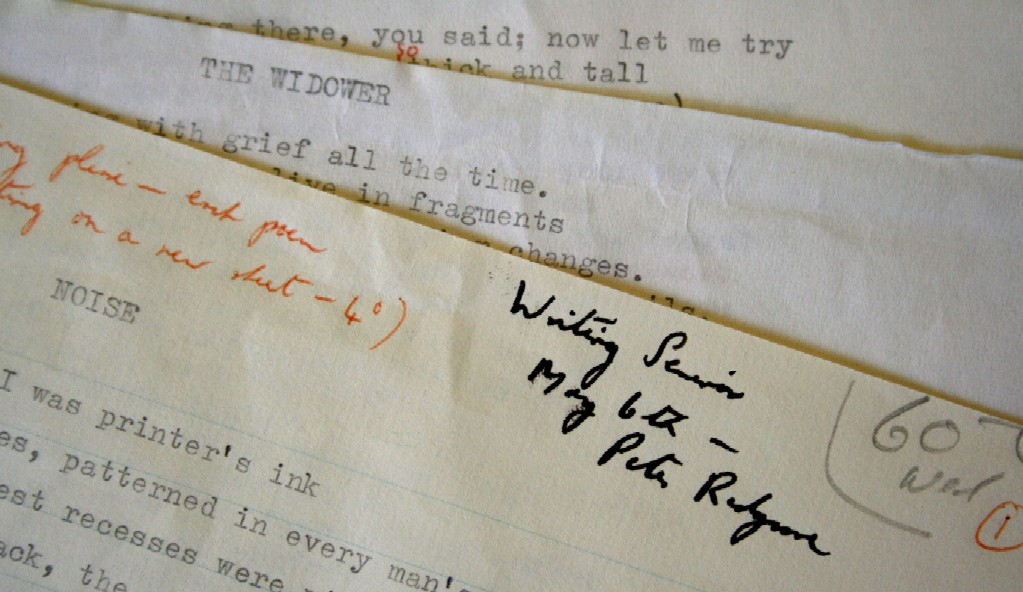 Redgrove later commented that his initial enthusiasm for the Gregory Fellowship came upon reading 'A Correct Compassion,' a poem written by James Kirkup during his tenure of the post. The Fellowship allowed Redgrove the liberty to compile the collection At the White Monument (1963), and to write the poems collected in The Force (1966). He saw his role as "that of observer and recorder in poetry of my observations," but also took an active role in university life. (5) He was invited to edit Poetry and Audience, and conducted a weekly creative writing group for students along the lines established by 'The Group', often offering his own work for discussion. In an article on writing at Leeds in the 1960s, Jon Glover remembers the importance of Redgrove's poetry seminars: "One learned about the effects words made independently of author: that a poem had to work by itself." (6) Dennis Creffield, the Gregory Fellow in Painting, produced a charcoal portrait of Redgrove in 1965 (above right), which is now held in Leeds University's art collections.

It was during Redgrove's Fellowship that the Department of English Literature's Poetry Room was established, under the directorship of Geoffrey Hill. From its early days, Gregory Fellows in Poetry were considered to be 'ex officio' members of the venture's steering group, the Poetry Room Committee. At the Committee's first meeting in January 1965, Redgrove defined what he thought the future functions of the Poetry Room should be, stipulating that in tandem with regular poetry recitals, the building up of audio collections was a priority. He envisaged the collections functioning as a teaching aid within the Department, in a similar capacity to the Library. (7)

Writing to Bonamy Dobrée in March 1963, Redgrove states: "Leeds continues to be one of the most active and useful times I can remember ... It's a wonderful place, and I hope I am doing some good." (8) He was later very positive about the advantages that fellowships could bring to writers, and in 1972 submitted with Brian Cox a report on the subject to the Arts Council. This led to the establishment of the Arts Council Creative Writing Fellowships. Amongst those who held this Fellowship were James Kirkup from 1974-1975 at the University of Sheffield, and Kevin Crossley-Holland from 1983-1984 at Winchester College of Art.

Following the end of his tenure of the Gregory Fellowship, Redgrove took a part-time teaching position at a training-college in Leeds, before taking up the post of Senior Lecturer in Complementary and Liberal Studies at Falmouth School of Arts in 1966. He held this position until 1983, and from 1974 to 1975 was also O'Connor Professor of Literature at Colgate University, New York.

In 1969 Peter Redgrove met the poet and writer Penelope Shuttle. Their relationship proved crucial to both their artistic development and saw a shift in the focus of Redgrove's work. They collaborated on various projects, both literary and anthropological; Shuttle is often quoted as the main influence behind Redgrove's poetry and vice versa.