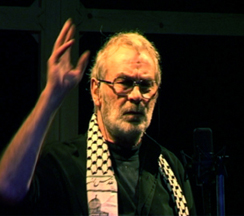 Ken Smith was a student at Leeds in the early 1960s, and became one of the first co-editors of Stand magazine following its relaunch. He returned to the University in the late 1970s to take up the Yorkshire Arts Association Fellowship in Creative Writing.

Ken Smith was born in Rudston, Yorkshire, in 1938. He was educated in Hull and Knaresborough, and served with the RAF during his National Service between 1958 and 1960. He went on to study for a degree in English Literature at the University of Leeds, graduating in 1963. Smith's time as a student at Leeds coincided with the presence of a number of poets within the School of English and the University more generally. Fellow students included Jon Silkin and, later, Jon Glover; Geoffrey Hill was one of his tutors; and he also came into contact with Gregory Fellows William Price Turner, and Peter Redgrove.

Smith's first published poem, 'The Lunatic,' appeared in Poetry and Audience in December 1960. He was Assistant Editor from 1962 to 1963, and continued to contribute poems to the magazine into the 1970s. An entire issue was devoted to his work in October 1963. (1) It was through his association with Poetry and Audience that Smith first came into contact with Jon Silkin, who, along with Geoffrey Hill, influenced his development as a poet. Writing in 1972, Smith stated: "I learned, in part from two poets at Leeds, Jon Silkin and Geoffrey Hill, that being a poet is a matter of growth, a way of living, integral." (2) He saw himself in the role of poet-apprentice in his relationship with Silkin, reminiscing in an interview with Colin Raw in 1997 that Silkin taught him "a hell of a lot," and that he "learned to apply that critical eye, that rigour with the vocabulary of a poem ... from him." (3) Following the success of the relaunch of Stand magazine, in 1963 Silkin invited Smith to become a co-editor, a position he retained until 1969. In 1964, Smith won a Gregory Award for Poetry, and his first pamphlet collection, Eleven Poems, was one of the first three publications to be issued in Silkin and Andrew Gurr's Northern House Pamphlet Poets series; he also became a co-director of Northern House.

In 1965, Smith left Leeds to take up a post teaching complimentary studies at Exeter College of Art. He initially missed the north, and the "declared warmth such as [he'd] come to take for granted in Leeds." (4) His first full poetry collection, The Pity, was published by Jonathan Cape in 1967. In 1969, he moved across the Atlantic to take up a residency at Slippery Rock College, Pennsylvania, a position he held for three years; this was to be the first of many writers-in-residence posts held by Smith. His next collection, Work/Distances was published by the Swallow Press, Chicago in 1972, the year in which he became writer-in-residence at the College of the Holy Cross and Clark University, Worcester, Massachusetts.

Smith returned to the United Kingdom in 1973, and in 1976 took up the post of Yorkshire Arts Association Creative Writing Fellow in the School of English at Leeds. This particular fellowship might be seen as filling the gap left when funding for the Gregory Fellowship in Poetry was frozen for two years. Smith's activities as Yorkshire Arts Association Fellow were essentially the same as those undertaken by Gregory Fellows in Poetry, for example, membership of the editorial board of Poetry and Audience magazine.

During his Leeds Fellowship, Smith continued to live in Exeter, commuting to the north during the week. His ongoing connections with Exeter enabled him to found the South West Review in 1977, a regional literary periodical he edited until 1979. His first marriage broke up at around the same time as the Leeds Fellowship ended, prompting Smith to move to London.

After working for a time as a barman in a Kilburn pub, Smith took up the post of writer-in-residence at Kingston Polytechnic from 1979 to 1981. The long poem (Fox Running), a collection of prose pieces (A Book of Chinese Whispers), and two further collections of poetry were published during the 1980s. Smith also collaborated with David Wait on Inside Time (1989), a prose account of prison life, following his experiences as writer-in-residence at Wormwood Scrubs Prison (1985-1987). He continued to travel extensively in the United States, Europe and Latin America, combining many of his trips with work for BBC Radio. A retrospective collection of Smith's poems, Shed, was published by Bloodaxe in 2001. In November 2002, he returned to the University of Leeds once again to participate in a poetry reading, alongside Jon Glover, Rodney Pybus, Jeffrey Wainwright and others, to mark the 50th anniversary of Stand magazine (pictured above).

Ken Smith died on 27 June 2003, after contracting legionnaire's disease during a visit to Cuba.